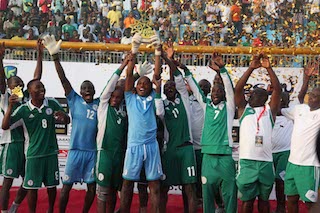 Nigeria’ Super Sand Eagles showed their supremacy in beach soccer as they won all their matches of the 2013 Copa Lagos Beach Soccer Championship.

The Super Sand Eagles, who have now won the competition three times in a row, had to be in their best to see off their West Africa neighbours and former African champions, Senegal to lift the trophy.

The Senegalese provided a combination of power and flair on the beach of the Eko Atlantic City, the venue of the game, but the Nigerian Sand Eagles proved too strong for them to break.


The game began at a high tempo with both teams showing skills and tactical discipline. The crowd had to wait for about 10 minutes into the cracker to see the first goal through Badmus of Nigeria who scored his goal from an acute angle to put the Sand Eagle ahead.

The presence of Tolu Oshunubi, Managing Director, FCMB Capitals proved to be a turning point as the Eagles improved their game to take a four goals lead, before the Senegalese battled to pull two back. The game ended 4-2 to the delight of Nigerian team and their fans.

Head coach of the Nigerian team, Audu Adamu expressed his delight after the game.

He said: “I am happy with the outcome of the game, this is the third time we are winning this tournament and you can see that we have improved over the years, I believe this team will go places. All the teams that participated in the tournament are good, it just a pity that one team had to take the trophy home at the end of the day”.

Meanwhile, in the other games of the day, former European League champions, Germany defeated last year’s runners-up, Lebanon by 5- 4.