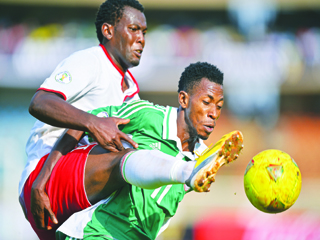 BUMPER-TO-BUMPER...Nigerias Nnamdi Oduamadi (RIGHT) vies for the ball with Kenyas Stephen Waruru during the 2014 World Cup Qualifying match between Nigeria and Kenya at the Kasarani football stadium in Nairobi on 5 June, 2013. AFP PHOTO

Nnamdi Oduamadi was largely unknown to football faithful around the world until 17 June, 2013 when he netted a hattrick in 66 minutes as Nigeria overpowered Tahiti 6-1 at the FIFA Confederations Cup in Brazil. In truth, Oduamadi had always shown promise as one of the future stars of Nigerian football long before his heroics in Brazil. He was a member of the Nigeria’s U-23 side that failed to qualify for the 2012 Olympics in London. Many blamed the team’s failure to make it to London 2012 on logistic setbacks that prevented most of the team’s top stars like Lukman Haruna, Rabiu Ibrahim, Odion Ighalo and Oduamadi to compete at the qualifying playoffs in Morocco. Oduamadi did not let the setback derail his progress and he duly forced his way into Stephen Keshi’s Super Eagles’ squad. Injury prevented him from making the team that won the title at the 2013 Africa Cup of Nations . He was interview by SuperSport.com, where he confessed that Nigeria’s group at the Brazil 2014 World Cup is not an easy one

You were involved in the pre-season preparations of AC Milan and even played in the Trofeo tournament against Juventus. Hopes were high that you would play in Serie A with the Rossoneri this season instead you were loaned out. Why was that?

I love Milan. Everyone knows that. Anyway, officials of Brescia had always wanted me to play for them. Some say it’s a demotion but I don’t see it that way.

I am still a player of Milan and I will return to San Siro at the end of the season.

What are the major differences between Serie A and Serie B?

In Serie A, you have a lot of space. You can show technique and the play is usually slower, more deliberate and tactics are very important.

Serie B is equally tactical with the teams planning carefully for each game. However, the major difference is that you have to run a lot more in Serie B (laughs) but I like it.

What are the chances of Brescia getting promoted to Serie A at the end of the season?

We are currently in 12th place but every team still has 22 more games to play so we are not giving up.

We have been unlucky in some games this season where we have dominated matches but not had the luck of scoring at the right moments.

The team is very strong and we will fight till the last game to secure our ticket to Serie A.

So how are you enjoying life in the city of Brescia?

Well, it’s a lovely city. It’s a fantastic city that I heard a lot about even before I joined the city’s football club.

When I was at Varese and Milan, I used to visit friends here in Brescia so to finally get an opportunity to live here is an honour.

The fans love me too. They warmed up to me after I scored on my debut for Brescia.

Last season, you played at another Serie B club, Varese….

Yes, I did. Varese and Brescia are two different football clubs. Their styles of play are different too.

I recall vividly that last season, Varese faced Brescia for a place in the Serie A playoffs and Varese lost 0-2. What I recall now is that the Brescia team we lost to then, was a very good side and to be a part of them right now is a pleasure.

Talk us through your hat-trick against Tahiti at the FIFA Confederations Cup.

It was an important moment for me. I was fired up before the game and God was so kind as I was lucky enough to convert the chances that came my way.

However, the most important thing was the win on the day. It was unfortunate that at the end I got injured and we failed to qualify for the semi-finals.

Watching you play for the Nigeria’s U-23 squad in an Olympic qualifying game against Botswana in 2011. You thrilled the fans with outrageous skills and flicks during that game at the Samuel Ogbemudia Stadium, Benin City. What happened to you that part of your game?

The skills are dead. (Laughs again). Seriously, when you grow older, you realise the importance of eliminating certain aspects of your game.

I am more mature now. In the past, I just wanted to show the fans what I could do with the ball but I am wiser now.

If you watch my game these days, I help the team. I mark and I fall back to do the defensive work as well because I understand that the team is more important than the individual.

However, if we are winning comfortably, I could still try out some skills.

What position do you prefer playing in?

My normal position is playing on the wings. The left side but it really depends on what the coach wants of me.

Coach Stephen Keshi prefers deploying me in a central position just between the strikers. The coach sees what a lot of people cannot see so I respect the decisions of my coaches.

Did you follow the draws of the 2014 FIFA World Cup?

Yes I did. I was nervous from the beginning to the end (laughs).

What do you make of Nigeria’s Group F opponents?

I have heard people say it’s an easy group but it makes me laugh.

Argentina have won the World Cup twice before and with Lionel Messi, they can do impossible things. They also have other great players like Sergio Aguero, Javier Mascherano and Angel di Maria.

Iran and Bosnia-Herzegovina are also very strong teams that can hurt us if we do not show them respect.

Small teams no longer exist in the modern day game and for those countries to have qualified means they have something to offer.

How far can the Super Eagles go in Brazil next year?

We must take it one step after the other. We will approach things game by game and see where it takes us.

Who is your best friend in the Super Eagles?

John Ogu and at Brescia, my best friend is Lucas Finazzi. He is a midfielder like me. He’s 23 and also has a brilliant left foot like me. He’s an Italian.