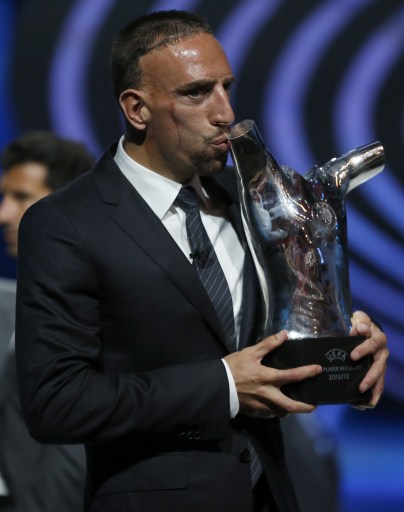 Less than 24 hours after being voted player of the tournament at the Club World Cup, France’s Franck Ribery has again been named Man of the Year in Germany.

After he also won the title in 2008, German football magazine Kicker voted the 30-year-old France star their man of 2013 for his outstanding displays for Bayern Munich.

On Saturday, Ribery picked up the top player award at the Club World Cup as Bayern beat hosts Raja Casablanca 2-0 in the Marrakech final to collect their fifth title of 2013.

“This year he has taken the step up to the level of absolute world class,” Bayern’s chairman Karl-Heinz Rummenigge.

Ribery was a key factor in Bayern becoming the first German team to win the treble of Champions League, Bundesliga and German Cup last season, as well as the UEFA Super Cup.

In August, Ribery was voted European Player of the Year and will discover next month if he has been voted world player of the year.

The 2013 winner of the Balloon d’Or will be announced in Zurich on January 13 and Ribery has been shortlisted along with superstars Lionel Messi and Cristiano Ronaldo.

Having joined Bayern from Olympique Marseille in July 2007, Ribery has not always had an easy time at Bayern and struggled under previous coach Louis van Gaal.

“Of course, I have my own style, many individuals need their freedom and that particularly applies to me,” he told Monday’s edition of Kicker.