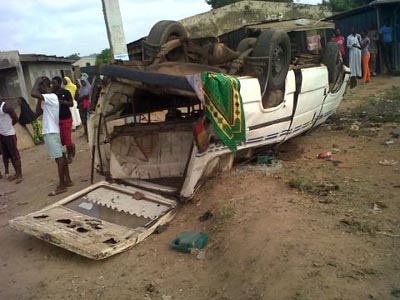 The accident,according to Nosiru Taiwo, the Public Relations Officer of the Federal Road Safety Commission (FRSC) Ogun state command, occurred at about 5.00pm.

“The bus belonged to the Road Transport Employers Association,Nigeria,RTEAN.The vehicle was coming from Ibadan and it was going to Sango Ota and decided to pass through Abeokuta,so as to avoid some gridlock on the road. The accident was caused by over speeding as the driver lost control when the tyre burst.The vehicle somesaulted and crossed the median,”said Babatunde Akinbiyi, the PRO of the Ogun State traffic management authority, TRACE.

Apart from the three persons who died, eight other persons, made up of six male and two female were seriously injured.

Akinbiyi said the accident could have been averted if the driver was not in haste to make money.