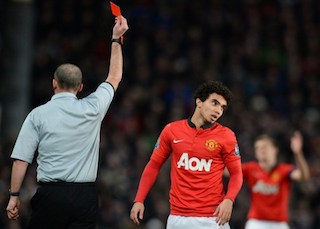 Wilfried Bony snatched a dramatic last-minute winner as Swansea City visited fresh misery on Manchester United with a shock 2-1 success in the FA Cup third round on Sunday. And it happened at Old Trafford.

Eleven points off the pace in the Premier League, where they have already lost six games, United crashed out at the first hurdle in the FA Cup to give beleaguered manager David Moyes even more problems.

To compound matters, United’s injury list swelled further after Rio Ferdinand had to go off with a knee injury, while Fabio da Silva was sent off shortly after coming on to replace him.

In a game preceded by a minute’s applause for late Portugal great Eusebio, who died on Sunday, Swansea took a 12th minute lead through Wayne Routledge, who cantered onto a pass from Alejandro Pozuelo to lob Anders Lindegaard.

The hosts equalised four minutes later, Javier Hernandez volleying in a cross from Alexander Buttner, but they could not find a second goal.

Ferdinand had to hobble off due to injury late on and his replacement, Fabio, was sent off for a high challenge on Jose Canas shortly after coming on.

Worse was to follow at the death, with Routledge lifting a cross into the box from the left and Bony powering home a near-post header to add a new chapter of disappointment to the tale of United’s unravelling season.