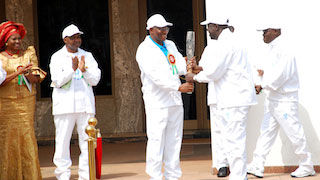 President Goodluck Jonathan on Monday expressed hope that Nigeria will put a better performance in the Commonwealth Games scheduled for July this year than it did in previous competitions.

The President spoke when he received the baton of the 2014 Commonwealth Games in Abuja at an event held at the forecourt of Aso Rock presidential villa.

The President who was dressed in a white track suit for the event added that he was also glad Nigeria was fully involved in the Queen’s Baton Relay, of 2014 Commonwealth Games which was flagged off by Queen Elizabeth II at the Buckingham Palace in October 2013.

Mallam Bolaji Abdullahi, the Minister of Sports handed the baton over to President Jonathan who later passed it on to Senator Bala Mohammed, the Minister of the Federal Capital Territory, for its onward journey to other parts of the FCT.


The short event was witnessed by Vice President Namadi Sambo; other top government officials, the top echelon of National Sports Commission, and the Commonwealth Games delegation.

This year’s Commonwealth Games will hold in Glasgow between 23 July and 3 August.