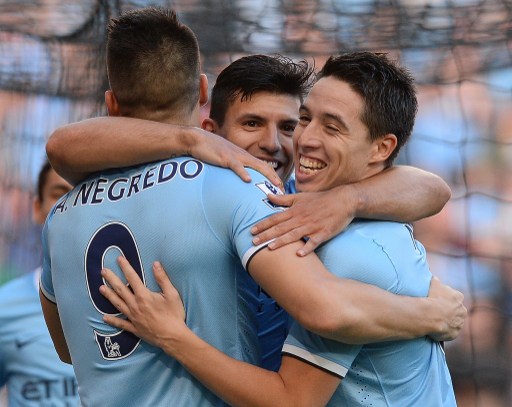 Man city boys: another dance of joy at Newcastle

Manchester City took over at the top of the Premier League table after winning 2-0 against Newcastle United in a tempestuous encounter at St James’ Park on Sunday.

Edin Dzeko and Alvaro Negredo claimed City’s goals, but the match’s defining incident occurred mid-way through the first half when Newcastle midfielder Cheick Tiote had a goal contentiously ruled out for offside.

It was City’s sixth consecutive league win and lifted them above Chelsea at the summit, although they will lose their hold on first place if Arsenal win at Aston Villa on Monday.

“It was a very difficult game and it’s a very big result as we know it’s a tough place to come and win,” said City manager Manuel Pellegrini, who also lost Samir Nasri to what he described as a “serious” knee injury.

Pellegrini played down a touchline row between himself and Pardew in the angry aftermath of Tiote’s disallowed goal and said that Jones had made the correct call.

“Nothing important was said on the touchline between me and Alan Pardew, but I think it’s impossible for the referee to handle a game when every time he gave a decision against Newcastle there were complaints,” he said.

“It was an offside goal as they were interfering with Joe Hart and the referee made that call.”

Pardew, whose side remain in eighth place, said that Jones had not adequately explained his decision to rule out Tiote’s goal.

“I’m not thrilled with the referee’s answer when I’ve asked for an explanation as I don’t quite get how he can disallow a goal of that quality on the technical point he is using,” he said.

“Joe Hart is nowhere near it. It goes through a crowd of City players who are impairing his view. It’s a massive call on a very technical point.”

Bidding to avenge a 4-0 defeat at City on the season’s opening weekend, Newcastle began at a high tempo, but it took the visitors less than eight minutes to make the breakthrough.

David Silva released Aleksandar Kolarov with an incisive pass down the inside-left channel and the Serbian left-back delivered a low cross that was clipped home by Dzeko.

The controversy arrived in the 34th minute when Tiote thrashed a superb shot past Hart from the edge of the box, only for Jones to disallow the goal after consulting his assistant, Stephen Child.

Hart kept Newcastle at bay in the second half, saving well from Yohan Cabaye and Loic Remy, before City midfielder Nasri had to be stretchered off following a wild, knee-high foul by Mapou Yanga-Mbiwa.

After Fernandinho had hit the bar with a header, Negredo sealed victory for City in the fifth minute of stoppage time when he ran the ball into the net after seeing an initial attempt blocked by Tim Krul.

There was controversy, too, as Liverpool beat Stoke City 5-3 in an enthralling match to return to the top four and claim their first league victory at the Britannia Stadium at the sixth attempt.

A fifth-minute Ryan Shawcross own goal and an opportunistic Luis Suarez effort put the visitors 2-0 up, only for Stoke to draw level before half-time through Liverpool old boys Peter Crouch and Charlie Adam.

Crouch reduced the arrears with a deft header from a Marko Arnautovic cross, before Adam drove a rasping drive past Simon Mignolet from outside the area.

However, after Marc Wilson had been penalised for felling Raheem Sterling, much to the disgust of the Stoke supporters, Steven Gerrard restored Liverpool’s lead from the penalty spot in the 51st minute.

Daniel Sturridge made his return from a seven-week injury lay-off as a substitute and he neatly teed up Suarez for his second goal — and 22nd of the campaign — with 19 minutes to play.

Jonathan Walters gave Stoke hope by squeezing a shot past Mignolet in the 85th minute, but Sturridge beat Jack Butland at the second attempt two minutes later to finally put a breathless game to bed.

“We made mistakes defensively, which wasn’t so good, and we’ll assess that, but to come here and get five goals and put in the effort and the work that we did was fantastic.”