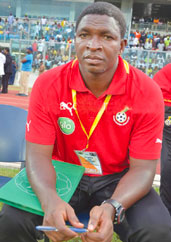 The Local Black Stars had a free pass to the finals after their opponents for the qualifiers Benin withdrew.

But they keep themselves busy with high-profile friendly matches against Ivory Coast (a two-legged tie), Mali and Libya.

Head coach Maxwell Konadu, who is second-in-command at the senior national team, was appointed late on but steered the club to win the 2013 Wafu Nations Cup on home soil.

The 1992 Olympian took charge of their preparations after Ghana’s qualification to the World Cup and led to beat Namibia’s Brave Warriors 1-0 in Windhoek two week ago.

He has the top three scorers of the Ghana Premier League- Siedu Bansey, Samuel Afful and Sulley Mohammed-in his fold.

“Yes, we are very ready and positive about our chances in the group,” Konadu told the Ghana FA’s official website.

“We have prepared well and I hope the players maintain their focus and stick to the plan.”

But Ghana’s opponents will not be pushovers as they qualified from the Central zone by defeating 2009 winners DR Congo.

Diables Rouges (Red Devils) have been quiet with their preparations but with AC Leopards winning the 2012 CAF Confederation Cup, they cannot be written off.