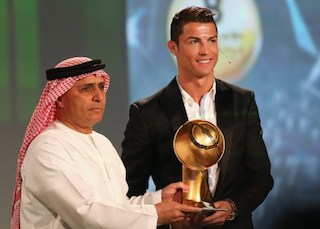 Until two months ago, the smart money was on Bayern Munich winger Franck Ribery becoming the fifth Frenchman to lift the Ballon d’Or but now Cristiano Ronaldo looks set to pip him at the death.

The Twittersphere has been going into overdrive amid speculation that for the first time, Ronaldo has brought seven members of his family with him to Monday’s ceremony in Zurich, perhaps an indication he knows it will end well for him.

Added to that, the 28-year-old’s club Real Madrid have suddenly revealed a change to the scheduled programming on their official television channel, with the ceremony now being broadcast live.

So after years living in the shadow of Lionel Messi, Ronaldo is expected to finally add to his one previous Ballon d’Or victory in 2008, when his goal in the Champions League final in Moscow helped Manchester United to an eventual penalty shoot-out victory over Premier League rivals Chelsea.

Yet should he win as expected, it won’t be without controversy.

Until November, Ribery appeared the clear favourite following on from a remarkable season in which his Bayern team had won the Champions League, Bundesliga and German Cup, before going on to lift the European Supercup and Club World Cup to boot.

Yet the original November 15 deadline was extended by FIFA and co-organisers France Football magazine “on account of an insufficient number of votes having been received”.

National team coaches and captains as well as journalists from around the world vote for the winner, with an initial 23-man shortlist being reduced to three last month.

The deadline extension has been widely seen as a move designed to help Ronaldo’s chances, meaning his World Cup play-off hat-trick against Sweden would be fresh in the minds of those submitting votes beyond the original November 15 cut-off.

Whatever the truth in that, there could be no doubt he would be a worthy winner.

In a team of superstars, or “galacticos” in Madrid, he stands out like a beacon.

His 66 goals in 56 games for club and country during 2013 is truly astonishing, despite the fact he and his team-mates won nothing.

Both Ribery and Messi achieved more in 2013, with Barca winning the Spanish La Liga while Real lost in the Spanish Cup final to city rivals Atletico Madrid.

Neither Messi, the reigning four-time winner of the Ballon d’Or, nor Ronaldo can match Ribery’s 2013 trophy haul.

The Ballon d’Or has traditionally gone to a player who’s enjoyed success on the field, whether with his country, such as Italy World Cup-winning captain Fabio Cannavaro’s 2006 success, or with his club, as Kaka’s victory following AC Milan’s Champions League triumph the following year attests to.

But while Messi and Ronaldo are the stand-out performers for both their clubs and countries, where Ribery’s candidacy is perhaps less credible is the fact that he was one of any number of Bayern players who could have found themselves on the final shortlist.

Bayern were by far the best team of 2013 and they really are a collective, built around 11 players of almost equal value.

Ribery has perhaps been the most impressive of the lot, but certainly not clearly. Yet a shortlist without a Bayern player would have been a scandal.

Ribery winning certainly wouldn’t be, but few could doubt that on an individual level, Ronaldo has simply been the best this season.

In the coach of the year category, Borussia Dortmund’s Jurgen Klopp is up against two greats who retired in 2013.

Meanwhile, USA star Abby Wambach will look to take the women’s award for the second year running, although she faces stiff competition from German goalkeeper Nadine Angerer and Brazilian Marta, who won the FIFA award five times in a row between 2006 and 2010.

Coach of the year candidates: