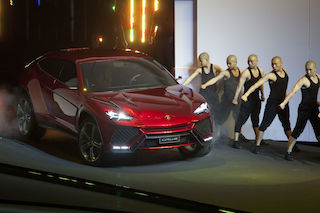 Lamborghini SpA, Volkswagen (VOW) AG’s Italian supercar division, plans to start building the Urus sport-utility vehicle in three years, the brand’s first model in the segment since the Rambo Lambo of the 1990s.

“The expectation” is to introduce the SUV in 2017, Lamborghini Chief Executive Officer Stephan Winkelmann said yesterday in an interview at the North American International Auto Show in Detroit. “The luxury SUV market is poised to continue to grow.”

Volkswagen’s Lamborghini, Bentley and Porsche high-end brands are all adding SUVs to their line-ups as the models’ high-riding position and larger storage space attract buyers in the U.S. as well as in emerging markets. Upmarket European producers entering the segment in the past 20 years include global luxury leaders Bayerische Motoren Werke AG (BMW), VW’s Audi unit and Daimler AG (DAI)’s Mercedes-Benz.

“The SUV segment is almost exclusively sold to the retail customer: it has better price points and better residual value” than sedans sold to fleet buyers, Erich Hauser, a London-based automotive analyst at International Strategy & Investment Group, said by phone. “In emerging markets, you have a real need for cars with better ground clearance” to handle poorly kept roads.

SUVs accounted for 30.9 percent of the U.S. auto market in 2013, an increase from 29.7 percent a year earlier, according to estimates by industry research company Autodata Corp. Wolfsburg, Germany-based VW, Europe’s biggest car manufacturer, said yesterday that its mass-market namesake brand will introduce a mid-sized SUV designed for North America in 2016.

Audi, which said on Jan. 9 that its Q line-up of the models helped propel sales growth in 2013, will begin selling the subcompact Q1 SUV in 2016. The best-selling vehicle at Stuttgart, Germany-based Porsche, a brand better known for the 911 sports car, is now the Cayenne SUV, and the unit plans to roll out the new Macan crossover in April.

Bentley got VW’s go-ahead in July to produce a crossover that will be the most powerful and, at about 180,000 euros ($246,000), the priciest in the SUV segment. The Crewe, England-based unit has received 2,000 advance orders for the model, even though customers haven’t even seen the reworked design, CEO Wolfgang Schreiber said yesterday in an interview at the Detroit show.

“Preparations for the SUV are progressing as planned,” with the vehicle scheduled to be unveiled toward the end of 2015 and sales to start in 2016, Schreiber said.

The vehicle may encounter competition from BMW’s Rolls-Royce Motor Cars super-luxury unit. Division CEO Torsten Mueller-Oetvoes said in a Jan. 9 interview that Rolls-Royce is considering whether an SUV would fit into its line-up. Tata Motors Ltd. (TTMT)’s high-end British car brand Jaguar displayed a prototype small SUV, dubbed the C-X17, at the Frankfurt auto show in September, though has yet to outline production plans.

Aston Martin, the U.K. sports-car maker that’s the only global luxury-vehicle producer not owned by a larger manufacturing group, is considering developing an SUV amid a wider investment drive to double vehicle sales, a person familiar with the situation said in September.

BMW, the world’s biggest maker of luxury cars, is bringing out the X4, its fifth SUV, this year. Stuttgart-based Mercedes, which ranks third in the premium-auto industry after Munich-based BMW and Audi, is scheduled to start deliveries of the GLA small SUV in March.

Fiat SpA (F)’s upscale Maserati division plans to introduce its first SUV as part of a strategy to expand sales to 50,000 vehicles in 2015. The model will be built in Italy starting next year, Maserati CEO Harald Wester said yesterday in an interview.

Lamborghini stopped producing the LM002 SUV, popularly known as the Rambo Lambo, in 1993 after a failed effort to make military vehicles. The Sant’Agata Bolognese-based carmaker unveiled a prototype of the Urus in 2012, when Winkelmann predicted the model could generate 3,000 deliveries a year.