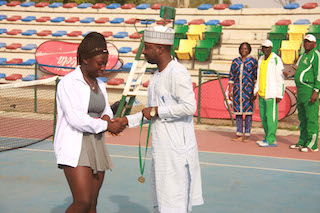 The qualifiers which took place at the Package B of the Abuja National Stadium saw nine countries taking part.

The News Agency of Nigeria (NAN) reports that Nigeria won the overall trophy after bagging a total of 13 gold and eight silver medals.

The medals were from the first and second legs of the championship in the various categories.

Togo finished second, with Mali in third place, based on points accumulated after the ITF second leg ranking competition.

NAN reports that only Senegal did not have any of its players qualifying for the AJTC scheduled for Nairobi in Kenya.

Sylvester Emmanuel will lead other Nigerian players to the Championship, in Nairobi, Kenya.

Emmanuel, who amassed a total of 250 points over both legs of the competition, defeated compatriot, Kaduna State-based player, Michael Michael 6-4, 6-2 in the boys’ U-16 final match of the National stadium Abuja.

The dark-skinned player will be joined on the plane to Kenya by Michael Michael in the U-16 category, while England-based Elizabeth Pam and Zainab Oladimeji will lead other West African girls in the same age category.

In the boys’ U-14, Christopher Itodo and Peter Lawal will represent Nigeria, while Barakat Quadri and Adetayo Adetunji will hold sway for the Nigerian girls in the same age category.

The President of the Nigeria Tennis Federation, Sani Ndanusa, said he was very happy with the success of the championship.

He also expressed his appreciation of the championship’s sponsors, saying “without them, Nigeria would not have been able to host the qualifiers’’.

Ndanusa however charged the Nigerian players to continue training before the main tournament in Kenya, urging them to be focused and dedicated.

While commending the Nigeria Tennis Federation for a well-organised tournament, Vice President, Confederation of African Tennis, CAT, Mohammed Omar Traore from Mali, said that it is the desire of CAT to see that the country’s tennis moves beyond its present state.

According to him, “let me congratulate the NTF for a well organised event for the junior players most especially their President, Engr. Ndanusa for his commitment to the sport.

“Having 20 tennis courts in Nigeria is great for the sport and our desire at CAT is to see the country’s tennis develop beyond what we are currently experiencing.”

While commending his players’ performance, national coach of the youngsters, Ubale Mohammed, told P.M. NEWS Sport after the competition that the country has improved from what was obtainable in the past.

He also explained that the players will begin camping from next week to put them in the right frame of mind and also work on their fitness level before the AJTC proper in March.

“We had injury scare at the beginning of the tournament but the players recovered quickly.

“If you have been following the players, you would have noticed a great improvement from what we used to have. We shall go to Kenya full of confidence now and I believe success will ours by God’s grace,” Ubale said.