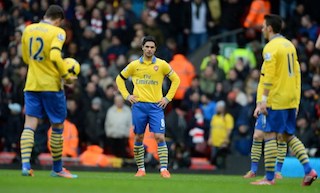 Eden Hazard scored a hat-trick as Chelsea capitalised on Arsenal’s crushing defeat at Liverpool by beating Newcastle United 3-0 to claim top spot in the Premier League on Saturday.

Arsenal’s 5-1 demolition at Anfield earlier in the day handed their nearest rivals an opportunity to leapfrog them at the top of the table and Chelsea took full advantage at Stamford Bridge.

Manchester City were unable to follow suit, however, drawing 0-0 at Norwich City and slipping to third place in the process.

Chelsea had served notice of their title credentials with an impressive 1-0 win at City on Monday and they were quick to take control against Newcastle despite captain John Terry missing out with a muscular strain.

Hazard broke the deadlock in the 27th minute with a first-time finish from a Branislav Ivanovic pass and the Belgian added a second seven minutes later following a neat back-heel by Samuel Eto’o.

A foul on Eto’o by Mapou Yanga-Mbiwa presented Hazard with an opportunity to complete his first Chelsea hat-trick from the penalty spot in the 63rd minute and he duly obliged by sending Tim Krul the wrong way.

“I know today we are top of the league, but I look to fifth place,” said Chelsea manager Jose Mourinho.

“I look to Tottenham v Everton and Manchester United v Fulham tomorrow (Sunday) and I want to be far from fifth.

“When we are far from fifth and have a Champions League position under control, then it will be time to look at Arsenal, Manchester City and Liverpool and see where they are and see the distances.”

Victory took Chelsea a point above Arsenal and two points clear of City, who were unable to repeat their 7-0 annihilation of Norwich from earlier in the season.

Manuel Pellegrini’s side dominated proceedings at Carrow Road, but in the continued absence of top scorer Sergio Aguero they came no closer to scoring than a first-half Alvaro Negredo header that hit the crossbar.

“We are frustrated because we could not win, but we did all we could and in front of us there was a team who defended very well,” said City manager Pellegrini.

“Every team will drop points, but we are still two points behind the leaders and we have 39 points to play for so we will continue exactly the same.”

Liverpool are now only six points off the summit after re-energising their title challenge with a clinical victory over Arsenal.

Martin Skrtel scored twice in 10 minutes to spark the rout, before Luis Suarez crossed for Raheem Sterling to make it 3-0 and Philippe Coutinho released Daniel Sturridge to score Liverpool’s fourth.

Sterling completed his brace early in the second half, with Mikel Arteta replying from the penalty spot for Arsenal in the 69th minute after Steven Gerrard was penalised for felling Alex Oxlade-Chamberlain.

“It was an incredible performance,” said Liverpool manager Rodgers. “It’s not the first time we’ve been outstanding at home, but everything about us today was incredible. Everything was outstanding.”

The one-sided victory lifted fourth-place Liverpool to within five points of Arsenal, a week before the sides are due to meet again at the Emirates Stadium in the fifth round of the FA Cup.

“It was a very poor day,” Arsenal manager Arsene Wenger told BT Sport. “We have to bounce back from that, and as quickly as possible.”

West Ham United leapt out of the relegation zone after captain Kevin Nolan took his tally of goals to four in two games with a brace in a 2-0 success at Aston Villa.

West Bromwich Albion slid into the space vacated by West Ham after going down 3-1 at Crystal Palace.

January signings Tom Ince and Joe Ledley marked their Palace debuts with goals, only for West Brom debutant Thievy Bifouma to hit back, but Marouane Chamakh sealed victory with a penalty mid-way through the second half.

Sunderland fell to within one place of the drop zone after losing 2-0 at home to Hull City.

The visitors prevailed through goals from new signings Shane Long and Nikica Jelavic after Wes Brown had been sent off for the hosts in the third minute for a last-man foul on Long.

Stoke City twice came from behind to force a 2-2 draw at Southampton, while the late game sees Swansea City tackle local rivals Cardiff City in their first match since Michael Laudrup was sacked as manager.