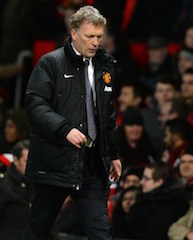 Fulham had taken a shock lead through Steve Sidwell in the 19th minute, but quick-fire goals from Robin van Persie and Michael Carrick in the final 12 minutes appeared to have set United on course for victory.

There was one final twist in the tale, however, as deep into stoppage time David de Gea could only push a Kieran Richardson shot into the air and Bent nodded in the rebound to earn Fulham a vital point.

The draw left United nine points adrift of Liverpool, who occupy the fourth and final Champions League place, while Fulham inched to within four points of safety at the foot of the table.

“It’s been a bit like that this season,” said United manager David Moyes.

“Today was as bad as it gets. We dominated the game. Being one down was bad enough. The amount of attempts, chances and play we had was unbelievable. How we didn’t win I have no idea.

“It’s goals that count. You can have as much possession as you like. We should have scored more. You’ve got to try and keep making it work.

“The players tried that today and eventually the goals did come and I was more disappointed we didn’t make it 3-1.

“It was a bit of carelessness at the back and we could have cleared the ball but didn’t, and it cost us.”

Fulham manager Rene Meulensteen, a former United coach, had seen his side eliminated by third-tier Sheffield United in the FA Cup in mid-week, but after weathering early pressure, his side took the lead.

As Fulham attacked down the left, Sidwell drifted into the box undetected and when Lewis Holtby picked him out with a lofted pass, the former Chelsea midfielder slid in to tuck a side-foot volley past De Gea.

United were not slow to react, Van Persie, Ashley Young and Carrick going close, but Richardson should have doubled Fulham’s lead in the 37th minute when he shot over with only De Gea to beat.

United resumed control, with Fulham goalkeeper Maarten Stekelenburg saving from Carrick and Nemanja Vidic before producing a stunning reflex stop to thwart Wayne Rooney early in the second half.

Moyes introduced Adnan Januzaj, Antonio Valencia and Javier Hernandez as United laid siege to the visitors’ goal and the pressure finally told in the 78th minute when Van Persie tucked in a volleyed cross from Juan Mata.

Less than two minutes later the turnaround was complete as Carrick beat Stekelenburg with a deflected shot from the edge of the box.

Moyes celebrated with scarcely disguised relief, but in the penultimate minute of stoppage time substitute Bent scored to complete another day of despair for the champions.

“They kept creating chances and crosses, but we defended fantastically well,” said Meulensteen.

“You think at the end all the hard work will slip away. But at the end, for Darren Bent to score that equaliser, it felt like a winner.”

United now find themselves six points behind fifth-place Tottenham Hotspur, who stole a march on Everton with a 1-0 victory over their Champions League qualification rivals at White Hart Lane.

Emmanuel Adebayor settled the game in the 65th minute, chesting down a quick free-kick from Kyle Walker and resisting the attentions of Seamus Coleman before drilling a low shot past Everton goalkeeper Tim Howard.