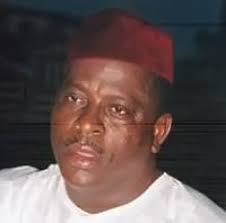 Buruji Kashamu: wanted in the US

Attempts by embattled chieftain of the Peoples Democratic Party in Ogun state, Chief Buruji Kashamu, to seek the shield of the Nigerian justice system against his reported criminal indictment by the United States government suffered a setback Wednesday.

Justice Gabriel Kolawole dismissed Kashamu’s application for leave to register the two judgments entered in his favour by United Kingdom courts which he claimed cleared him of alleged criminal offences over which the United States Government was reportedly seeking his extradition.

Ruling on the application, Justice Kolawole held that the court could not extend the period within which the judgments could be registered.

“I doubt that the period of six years which the law provided for registration could be extended. I find myself unable to exercise my discretion to grant the prayer. This is a process that constitutes an abuse
of the court process and is hereby dismissed,” the judge ruled.

The favourable judgments which the PDP chieftain sought to register were delivered on the 6th and 10th October, 2000 respectively.

In a motion exparte filed by his counsel, Dr. Alex Izinyon, a senior advocate of Nigeria, was brought pursuant to Order 6 Rule 14(1) of the Federal High Court (Civil Rules, 2009 Section 10(a) of the Foreign Judgments (Reciprocal Enforcement)Act Cap. F.35 LFN 2004.

In the judgment of October 6, 2000, District Judge Tim Workman quashed the committal order having found the proceedings against Kashamu unfair because the U.S Government concealed vital identification evidence.

That of October 10, 2000, was a judgment from a full trial where the United Kingdom court declared that Buruji had no question to answer.

The United Kingdom court noted that it was satisfied that the overwhelming evidence before it was such that the identification evidence, already tenuous, has now been so undermined as to make it incredible and valueless and went ahead to hold that under the circumstance, that there is no prima facie case against Buruji Kashamu and subsequently discharged him.

He also prayed for “an order of the court for leave to issue and serve the processes filed in the suit, outside the jurisdiction of this court on the Respondents office at 20 Victoria street, London, England,SW1H ONF.‎

In support of the application, Kashamu formulated 10 grounds, which included the claim that he was “unaware that he needed to register the aforesaid judgments delivered in his favour by the said courts in the United Kingdom in Nigeria and out of negligence did not obtain the services of a legal practitioner to specifically advise him on this issue until he was informed by his counsel, Dr. Alex A. Izinyon, SAN on 10th December, 2013.