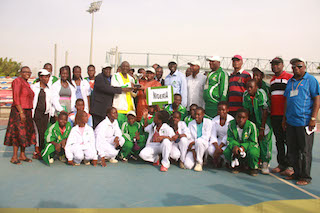 The Nigerian contingent to the African Junior Tennis Championship, AJTC for U-18 have arrived Morocco for the championship.

National coach of the youngsters, Ubale Mohammed, who spoke with P.M.NEWS Tennis Special on arrival in Morocco, said that the team are ‘battle’ ready for the tournament.

Ubale also assured that his players will improve on Nigeria’s last year record at the tournament where the boys got to the third round of the singles event and quarter-final of the doubles.

“The seven players and I landed here safely on Sunday afternoon. I can tell you that we are on course to do the nation proud.

“One of the players, Elizabeth Pam had been here before us and she has been in good shape training,” Ubale said.

He also added that, “We look forward to performing better than we did in our last outing in South Africa where we got to the third round in the singles and were ousted in the quarter final of the doubles.

“The players are charged than ever to make a statement in this tournament. They want to make name for themselves and also make the country proud.”

Meanwhile, President of the Nigeria Tennis Federation, NTF, Engr. Sani Ndanusa, has assured Nigerians that the players in Morocco will make the country proud.

“I watched some of them in action during the AJTC qualifiers in Abuja and I was also with them in training. I can assure you that they are prepared to make Nigeria proud.

“All they need is our support and prayers to ensure that they go beyond the stage we reached at the last outing,” the Nigeria Olympic Committee, NOC President stated.

The AJTC, which is ongoing in Morocco, will end on Saturday, 22 February.