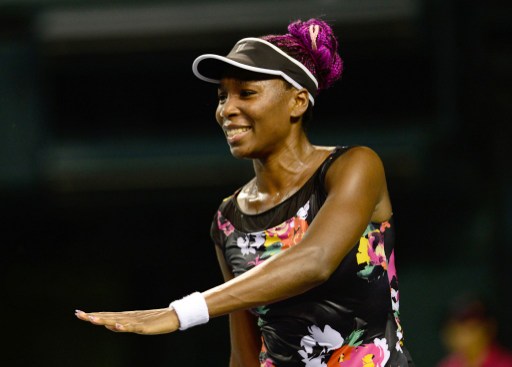 Last week’s assertion by Venus Williams that she still has what it takes to deliver at the highest level acquired some credence when she impressively settled a score to reach the second round of the Dubai Open.

The 33-year-old seven times former Grand Slam title winner had lost to Elena Vesnina in both their previous meetings but outplayed the world number 33 from Russia by 6-3, 6-2 in little more than an hour.

Encouraging too was that Williams, who has to cope with an immune deficiency on a daily basis, maintained her high standard right till the end and finished looking fresh.

“Every time I played her before she played unbelievably well,” she said.

“I don’t think she was at her best today, but I’m thankful there will be more matches.”

Williams was referring to an early loss in Doha last week after holding match points against Petra Kvitova, the former Wimbledon champion from the Czech republic.

To capitalise on tenacious efforts to regain health and fitness she needs to compete as often as possible – but so far this year in four tournaments she has played only nine matches.

She struck the ball with controlled aggression off the ground and also served well, perhaps the key to the whole performance.

She landed more than 60 percent of her first deliveries, often regarded as the measure of good serving, and won points behind the vast majority of them.

Having consolidated that break of serve and closed out the first set, her momentum increased, and she was soon 3-0 up in the second set and motoring. By the end she had secured a double break.

“The more matches I play, the better I will feel,” she said.

“I feel like I have just gotten a little rusty sometimes in those areas. Yeah. That’s pretty much it.”

Williams, whose younger sister Serena will also compete in Dubai after returning earlier from injury than expected, said that she was staying around because she loved the game.

“Tennis keeps you young. I love the game. I love being out there and giving my all.”

Her reward is a second round against either Angelique Kerber, the sixth seeded German who was last week’s runner-up in Doha, or Ana Ivanovic, the former world number one from Serbia who beat her in last month’s final in Auckland.

Serena Williams will play Ekatarina Makarova, Russia’s world number 24, in the second round.

Another American, Sloane Stephens, is in danger of dropping out of the world’s top 20 after a second successive first round loss.

Stephens, who was beaten in straight sets by Petra Cetkowska of the Czech Republic in Doha, went down 7-5, 6-3 to another Czech, Lucie Safarova.

“Some days, you’re like, this sucks, my life sucks – but it could be way different and I could be in a completely different situation,” said 20-year-old Stephens, who revealed she was now going to return home to Florida.

“I’m just thankful for everything that I have, and it’s nothing to be, you know, too down about.”