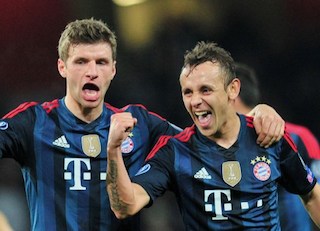 Diego Costa headed home seven minutes from time to give Atletico Madrid a 1-0 win away to AC Milan at the San Siro in the first leg of their Champions League last 16 tie on Wednesday.

Milan had the best chances in the first half, with former Real Madrid man Kaka striking the bar and then having a header brilliantly turned onto the post by Atletico goalkeeper Thibaut Courtois.

Costa’s goal was his 27th in all competitions this season, and his fifth in the Champions League.

In the Emirates Stadium in London, goals by Toni Kroos and Thomas Mueller gave Champions League holders Bayern Munich a 2-0 win over 10-man Arsenal in their last 16, first-leg match.

Kroos and Mueller — both of whom scored in the corresponding fixture a year ago to the day — struck in the second half after both sides had missed penalties in the first half.

The hosts had goalkeeper Wojciech Szczesny sent off for a rash challenge on Arjen Robben when conceding their penalty.