47 killed by Boko Haram in latest attack on Bama 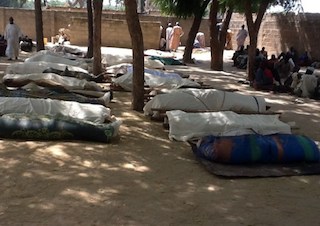 No fewer than 47 people were killed in the early Wednesday’s attack on Bama by dozens of Boko Haram gunmen, according to Lawal Tanko, the police boss, for the besieged state of Borno, in northern Nigeria.

But the true picture of event according to witnesses was that the Boko Haram gunmen stormed the town, opening fire on a school, shooting or burning to death 47 people and trashing the palace of the traditional ruler.

He added that the assailants had also partly burned down the palace of the traditional ruler of Borno, whose kingdom was one of West Africa’s oldest medieval Islamic caliphates.

“Boko Haram came in at about 4.00 a.m. (0300 GMT), just when we were getting ready for the morning prayers,” said Bama resident Abba Masta, who lives near the palace.

“There was shooting everywhere and they set the palace on fire. Many died. Students had to run for their lives as they attacked the government girls college as well.”

It was one of several deadly attacks this week.

On Sunday the Islamists killed 106 people in Igze village, according to official figures, making it one of their deadliest assaults so far. That prompted the Borno state governor to say the rebels were better armed and motivated than government forces.

“The senseless targeting of innocent civilians is unacceptable,” U.S. State Department spokesman for Africa Will Stevens said in Washington on Wednesday, referring to the Igze attack.

“We encourage Nigerian authorities to investigate this heinous act and to hold accountable … those responsible.”

The military denied Boko Haram were better armed or motivated and said it was making progress, but that no country facing terrorism had defeated it completely.