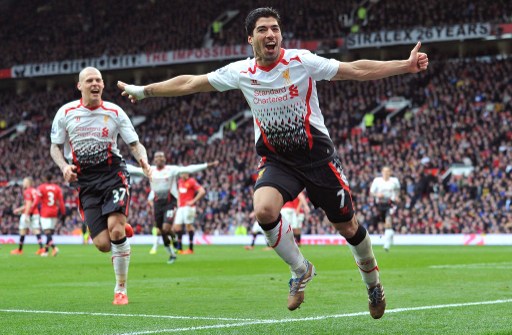 Suarez dash for joy after scoring against United at Old Trafford

Gerrard found the net from 12 yards either side of half-time before Luis Suarez added a third goal in the 84th minute to give Liverpool their first victory at Old Trafford in five years.

Gerrard should have had a hat-trick of spot-kicks, with a third penalty hitting the post after United captain Nemanja Vidic had been shown a second yellow card for felling Daniel Sturridge, but it was to prove anecdotal.

Liverpool retain a game in hand on Chelsea, who lost 1-0 at Aston Villa on Saturday, and while Brendan Rodgers’s side look more like potential champions with each display, United’s season continues to unravel.

This was the defending champions’ fifth home defeat of the campaign and having started the day 11 points below the Champions League places, their hopes of a top-four finish have been all but extinguished.

As a result, Wednesday’s Champions League home game with Olympiakos now takes on crucial significance, but with United 2-0 down from the first leg of the last 16 tie, there could be more misery around the corner.

United manager David Moyes had admitted prior to the game that Liverpool’s form “probably” made them favourites, but he will have been alarmed by the ease with which the visitors found holes in the hosts’ defence.

There were fewer than three minutes on the clock when a Jordan Henderson pass down the inside-right channel set Sturridge free, but he shot wide with his weaker right foot.

There was plenty of commitment to United’s play, with Phil Jones and Robin van Persie both flying into early challenges, but they had not mustered a shot worthy of the name by the time Liverpool went ahead in the 34th minute.

As Suarez looked to dink the ball past Rafael da Silva on the left-hand side of the area, the Brazilian jutted out a hand and referee Mark Clattenburg immediately awarded a penalty.

Having been booked for clattering Gerrard moments earlier, Rafael was fortunate to avoid a second yellow card, but the Liverpool captain showed no mercy from the spot to silence the catcalls from the Stretford End.

Liverpool’s fans at the opposite end of the ground celebrated deliriously, and although United briefly rallied, with Wayne Rooney stinging Simon Mignolet’s palms, there was more of the same to come.

Only 25 seconds of the second half had elapsed when Jones barged into Joe Allen after he had chested down a lofted pass from Jordan Henderson and Gerrard’s spot-kick, into the bottom-right corner, was again unerring.

Rooney then had a penalty claim of his own turned down, after a collision with Martin Skrtel on the edge of the Liverpool box, and when a rare chance fell to Marouane Fellaini, he blazed over.

After Van Persie had headed wide from a Rooney cross, Gerrard was handed an opportunity to complete a first ever hat-trick against United when Vidic sent Sturridge sprawling.

This time, however, his aim was slightly off, with the ball cannoning against the base of the left-hand post and away.

Liverpool were not finished though. Moments after being thwarted by a stunning save from David de Gea, Suarez ghosted in behind the hosts’ flatfooted defence to roll home and make United’s misery complete.