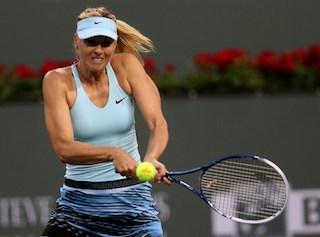 World number one Rafael Nadal hammered former number one Lleyton Hewitt 6-1, 6-3 Saturday to reach the third round at the ATP and WTA Miami Masters hardcourt tournament.

The top-seeded Spaniard and his veteran Australian opponent took to the court two and a half hours late due to long matches that preceded them.

But Nadal, who received a first-round bye, ripped through the opening set in 27 minutes and eventually dispatched double Grand Slam winner Hewitt in 66 minutes.

“It’s great for me to be back after not playing since 2012. I really enjoy it here,” Nadal said.

“There was no better way to start my return than with a win like this.”

It was a different experience for Russian star Maria Sharapova, who had to battle through three sets Saturday to advance into the fourth round on the women’s side.

Nadal took his sixth win in a row over Hewitt, improving him to 7-4 in their rivalry overall.

“I have the greatest respect for Lleyton,” Nadal said. “He’s a great example to me and the other players the way he has come back from injuries.

Serbian second seed and three-time Miami champion Novak Djokovic advanced to the fourth round when opponent Florian Mayer retired a day before their scheduled match with a groin injury. Djokovic will next play Tuesday.

Sharapova let out a scream of relief when she finally went through as Safarova’s shot hit the net, Sharapova having missed two chances in the second set to wrap it up early.

“She was just hitting unbelievable shots on the match points,” said Sharapova. “I kept asking myself how many more chances I had.

“I’m just so happy to go through.”

Sharapova ended her marathon with nearly twice as many unforced errors, 51, as winners, 27, and double-faulted eight times.

Williams, 32, bidding for a record seventh title at her home tournament, now stands 63-7 at the venue and was far from pleased with her showing.

“Granted she played great, but I made so many errors, I hit so short,” said Williams. “It really isn’t the same player. I just have to do better.

“It’s important to stay positive. Obviously I wasn’t at my best. I had 40-something errors. It’s not the way to play professional tennis.”

The third-seeded Swiss raced through an 18-minute opening set, winning the first seven games before eventualy losing the second set.

Wawrinka recovered on cue in the third with an opening break to advance in just under 90 minutes and then admitted he is still adjusting to his new status as a Grand Slam winner.

“I still have some ups and downs mentally. I was negative in the second set a little bit stupidly, but then I’m really happy with the way I started the third set,” Wawrinka said.

Wawrinka, 14-1 this year, fired eight aces and broke four times in only his fourth ATP match since beating Nadal to capture his first major title.