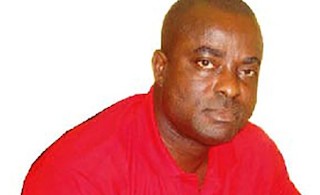 A Magistrate’s Court on Monday in the eastern Nigerian city of Umuahia, capital of Abia State has ordered the arrest of Mr Ebere Wabara, a columnist with The Sun Newspapers, for alleged failure to appear in court.

Chief Magistrate John Ukpai made the order Monday. He also ordered the arrest of Mr Chuks Onuoha, the Abia correspondent of The Sun Newspaper, who reportedly secured bail for Wabara on Saturday.

Wabara, who is also an aide to former Gov. Orji Kalu of Abia, was arrested by the police in Lagos on Friday and handed over to the police command in Umuahia.

He was arraigned on a 10-count charge of sedition and malicious publications in different editions of The Sun Newspapers.

The prosecution counsel, Chief Chukwunyere Nwabuko, said that Wabara, along with others at large, was alleged to have on March 10, authored a defamatory article in The Sun Newspaper, page 21, entitled “T.A. Orji’s 7 years Demystification of Kalu’.

Nwabuko said the publication was intended to discredit Gov. Theodore Orji in different editions of the newspaper and injure the reputation of Chief Chinedu Orji, the governor’s son.

“The publication also intended to expose Chinedu to hatred, contempt or ridicule by describing him as a terrorist, knowing same to be false, thereby committed an offence.

“The offence is punishable under the Criminal Code Cap 80 Vol 3 Laws of Abia State of Nigeria 2005,’’ he said.

Nwabuko alleged that Wabara had in one of his publications alleged that Chinedu, on March 15, ordered the shooting of his former Personal Assistant, late Mr John Ndubuka.

Meanwhile, Onuoha, who secured his bail, told NAN on phone that he was not aware that Wabara was served any summons by the court.

He said that Wabara arrived in Umuahia late on Saturday and was released on bail same night by the police.

According to him, the defendant went back to Lagos by bus on Sunday morning and was said to have taken ill and hospitalised shortly after.

“The directive I got for his bail was that I should produce him at the police headquarters on Monday morning. I am not aware of the court order for his arrest or arraignment,’’ Onuoha said.