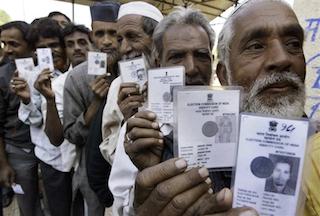 Queuing to vote in India: parties offer money, whiskey to induce them

NEW DELHI(AFP) – Rickshaw puller Rampal Singh remembers vividly the “feast” of democracy he enjoyed last time India went to the polls in 2009: it included a free hot meal, a bottle of whisky and a banknote.

“They treated us to really good biryani (rice cooked with meat) and a quarter of whisky,” Singh says wistfully of the hospitality lavished on him by a major political party.

“I was taken in a bus to a venue where people were being treated like guests at a grand feast. We were also handed a 500-rupee ($8) note. Then we were asked to vote for them,” he told AFP.

Singh, who earns about 5,000 rupees a month cycling his single-gear rickshaw around the dusty streets of New Delhi, has a family of five to feed, and was only happy to oblige his host at the ballot box.

“I am sure they will take us around this time as well,” the 42-year-old said ahead of voting in the capital on Thursday in the third of nine phases of balloting in the marathon election.

Influencing voters through illicit liquor and cash is an age-old trick across the country, despite heavy penalties prescribed by the Election Commission against vote-buying.

On Monday, the Commission said it had seized over $32.5 million in cash and 2.7 million litres of liquor in country-wide raids since the polls were announced on March 5.

Just the confiscated alcohol would be enough to offer roughly one in every 80 of India’s 814 million voters a quarter-litre bottle of the sort enjoyed by Singh in 2009.

Past elections have seen alcohol being secretly transported in water tankers and cash stashed in ambulances. Seventy kilograms (154 pounds) of heroin has also been seized by election officials since March.

K.G. Suresh, a fellow at New Delhi’s Vivekanand International Foundation think-tank, says it is easy to entice voters in a country where nearly 70 percent of the population lives on less than $2 a day.

“There are millions in the country who have to struggle for even a square meal. Election for them is a pay-day and loyalties depend on who has what to offer,” he told AFP.

“So a candidate may end up losing simply because his rival has deeper pockets than him and can afford poll-eve treats,” he explained.

While handing out liquor and cash before elections is illegal, many political parties rely on legitimate election freebies as a crucial means to secure loyalty from voters.

The chief minister of southern Tamil Nadu state, Jayalalithaa Jayaram, is seen as the queen of such tactics, having handed out sewing machines, spice mixers and even gold to the poor after her party won state elections in 2011.

In her 2014 manifesto, she promises cows, goats, fans and 20 kilos of rice for the poor.

Ahead of 2012 state polls, the Samajwadi Party, a regional party based in northern Uttar Pradesh state, promised to distribute free laptops to high school students.

The party secured a thumping win in the state, which is one of the key battlegrounds for the 2014 polls because it sends 80 out of 543 MPs to parliament.

“It was a master stroke from the party. Many students had never even held a laptop before, forget being able to buy one,” said Radhe Shyam Lal, a senior state government official.

There can be unexpected downsides, however.

Suresh of Vivekanand Foundation recalled how the regional DMK party from Tamil Nadu offered free television sets to voters ahead of 2006 state polls.

The party then became embroiled in one of India’s biggest ever corruption scandals when DMK minister A. Raja was charged with fraudulently selling mobile phone licences, losing the national exchequer up to $39 billion.

“These people when they saw news about DMK’s corrupt practices on their TV sets, they decided not to vote for it again in 2011,” he said.