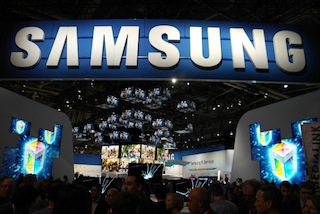 The latest version of Samsung’s flagship Galaxy smartphone series went on sale worldwide Friday, days after the electronics giant announced it was facing a second consecutive quarter of profit decline.

The Galaxy S5 has a lot riding on it to steer the South Korean firm’s profit-making machine back on track as growth in smartphone sales slows, with mature markets like North America and Europe near saturation.

Reviews of the S5 have mostly concluded that it is one of the best high-end smartphones on the market, but there is also a general consensus that it lacks the “wow” factor to differentiate it from its predecessors and competitors.

“It can swim, but it won’t make any waves,” was the verdict of the Wall Street Journal, referring to one innovation in the S5’s waterproof covering.

Samsung’s mobile unit has been the driving force behind the record profits of recent years, and it needs the S5 to perform well as a retort to the doom-mongers who say the company lacks a clear strategy to flourish in an increasingly competitive, saturated market.

Samsung made more than 30 per cent of all smartphones sold in the world last year, nearly twice the share of its arch-rival Apple.

But on 8 April, the company estimated its first quarter operating profit at $7.96 billion, marking a second straight year-on-year decline.

In a sign of the challenge the company faces, the S5 was priced lower at its commercial launch than the previous S4 model.

Samsung is believed to have reduced its marketing spend on the S5 and is also under pressure to set aside more cash for legal bills as years-long patent battles against Apple continue.

The two have locked horns in patent suits in several nations involving design and technologies on their smartphones and tablet computers.

A fresh patent trial opened in the United States last week, with Apple vowing to prove that Samsung flagrantly copied iPhone features and should pay more than $2 billion in damages.