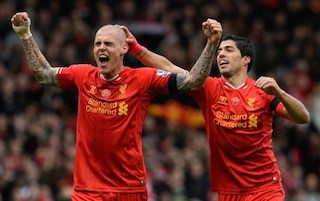 Liverpool took a giant stride towards their first English championship of the Premier League era with a thrilling 3-2 win over title rivals Manchester City at an emotional Anfield on Sunday, where fans marked the 25th anniversary of the Hillsborough disaster.

Victory left the destiny of the title, which they last won in 1990, in Liverpool’s own hands as they went five points clear of second-placed Chelsea, away to Swansea later Sunday, and seven in front of City.

Third-placed City have two games in hand on both Liverpool and Chelsea.

Liverpool’s Philippe Coutinho sealed a 10th win in a row for Brendan Rogers’ men 12 minutes from time after visitors City had come from 2-0 down to draw level at 2-2.

First-half goals from Raheem Sterling and Martin Skrtel put Liverpool in control only for City to hit back after the break through David Silva and a Glen Johnson own-goal.

But Coutinho made it 3-2 in the 78th minute after seizing on a sliced clearance from City captain Vincent Kompany to beat England goalkeeper Joe Hart with a low shot from the edge of the box.

The Merseysiders had to play the closing minutes of stoppage-time a man down after Jordan Henderson was sent off for a wild challenge on Samir Nasri.

Liverpool and England captain Steven Gerrard, who has spent his whole senior club career at his hometown club, was in no doubt of the significance of the result.

“It’s emotional but we need to stay calm as we still have four big games to come — but that meant so much, especially when they came back,” Gerrard told Sky Sports.

“We have got four cup games left,” the midfielder insisted.

“People said that the biggest one was Manchester City but I disagree, the big one now is Norwich (Liverpool’s next game). Nothing is ours yet.”

Before kick-of, there was a minute’s silence in memory of the 96 Liverpool supporters killed in a crush during a FA Cup semi-final against Nottingham Forest at Sheffield Wednesday’s Hillsborough stadium on April 15, 1989.

Both teams wore black armbands and, in another tribute to the victims of the tragedy, matches across England were moved back by seven minutes this weekend, reflecting the moment the fateful match at Hillsborough was called off.

A memorial service is due to take place at Anfield on Tuesday, which will mark exactly 25 years since the tragedy.

This month saw a new inquest into the deaths of the Hillsborough 96, including Gerrard’s 10-year-old cousin Jon-Paul Gilhooley, start in Warrington, east of Liverpool, after the original coroner’s verdicts were quashed by the High Court in December 2012 amid claims of a police cover-up.