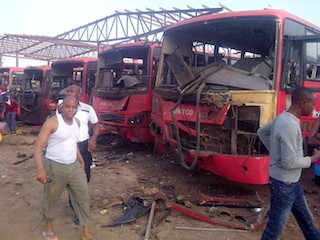 A cross section of Nigerians has called on federal government to review its anti insurgency tactics in view of the bomb blasts in the Federal Capital Territory early Monday morning that killed dozens of people and wounded many others.

Delegates who resumed sitting at the on-going National Conference holding in Abuja on Monday rose for a one minute silence in honour of the victims of the blast.

Immediately one minute silence was completed, Barrister Dan Nwanyanwu of the Labour Party raised a motion on what he called issue of urgent national importance. It was not lost on the members of the Conference what the issue was.

He drew the attention of the delegates to the bomb blast and lamented, “I think there is conspiracy against Nigeria and the Nigerian people; there must be an enemy within.”

He urged the Conference to immediately react to the incident by urging the necessary security agencies involved in the fight against terrorism to maximise their efforts in the war against innocent killing of people across the country.

The motion, seconded by Chief Mike Ozekhome, SAN, was however overtaken by a written motion hitherto submitted to the Conference Chairman. It was sponsored by Is’haq Modibbo Kawu and 19 others.

The prayers contained in the motion and which were all adopted by the Conference included condemnation of the activities of the perpetrators of the heinous crimes and that in particular, the federal government and other stakeholders should commence the immediate implementation of all actionable recommendations made to it by various committees such as the Gaji Galtimari, Kabiru T. Turaki, Borno/Yobe Elders, etc.

“That the federal government should immediately commence a process of reconciliation, rehabilitation and reconstruction of the affected areas.”

The motion, seconded by Hannatu Ibrahim also received inputs from other delegates. For instance, Femi Falana asked for immediate collation and implementation of other reports not mentioned in the prayers.

Before the adoption of the motion and the prayers sought by the sponsors, Olawale Okunniyi of the Pro-National Conference (PRONACO) suggested that a committee be set up by the Conference to closely look into security issues that have resulted in many deaths.

Chief Edwin Clark whose son was kidnapped two weeks ago said it was imperative that the Conference send a message to the federal government on the way forward because the country was no longer safe.

He noted, “I think the issue of my son that was kidnapped is very small now. What is happening in Nigeria is a national issue. Nigerians are being killed day by day. We have a duty to look into this issue and not to play politics with it. It is a national calamity.”

Clark admonished the Conference to know that the existence of Nigeria as a nation would depend on what delegates do with the opportunity the National Conference has offered them.

“We have no other country to go to,” he added, “we hear everyday 200 people being killed, and we show no concern; we sit down here deliberating, what are we deliberating about? This Conference must send a message to government.”

The High Chief went very emotional when he suggested that his daily lunch be monetized and the money sent to take care of those who escaped the bomb blast.

On its part, the All Progressives Congress Governors’ Forum after a reviewe of the security situation in the country concluded that the Federal Government had run out of ideas on how to checkmate terrorists and other criminals.

The governors, who commiserated with the families of victims of the blast, regretted that the death of innocent Nigerians had become a daily occurrence with little respite.

The statement, which was signed by the Chairman of the Progressive Governors’ Forum and governor of Imo State, Owelle Rochas Okorocha, noted with concern that no fewer than 1000 innocent Nigerians had been slain in the last two weeks.

The Forum also commiserated with the parents and families of the JAMB candidates, who were killed over the weekend while trying to sit for the University Matriculations and Tertiary Examinations, UMTE, in Mmaiduguri in Borno State.

“As if failing to tackle the Boko Haram insurgency is not bad enough, the security situation has deteriorated to a level where so-called gunmen are now on the rampage across Nigeria, killing and maiming at will with no response from our poorly equipped and informed security operatives.

“Is it too much for government to, at the very least, identify the perpetrators of these terrible crimes?,” PGF queried.

Also, while expressing his sadness over the bomb blast, former Vice Atiku Abubakar said in a statement by his media office in Abuja that the needless blood-letting cannot continue unabated and requires new strategies to nip it in the bud.

“As a country, we are not doing enough of focusing on and implementing solutions,” the former Vice President said. “We are all guilty of expending endless energy on handwringing and the trading of blame, none of which is able to save lives or change the status quo.”

The former Vice President recalled that government had in February this year spoken about its successes in pushing Boko Haram to the “fringes” of the North East, where a state of emergency currently exists in a number of states, and where the Boko Haram terrorist group has carried out many recent and deadly attacks.

“The bombings, which took place at a motor park in Nyanya a suburb of the Federal Capital Territory, automatically cast doubts on the claims of containing the crisis to the fringes of the country.

“There is an urgent need for the government of Nigeria to review its methods and strategies for dealing with terrorism,” Atiku
said.

He called for a step up in intelligence, listening posts, picking up trends and conversations with a view to pre-empting terrorist attacks.

The former Vice President also stated that it is time for Nigeria to accept foreign assistance with fighting terrorism in the country.

The Maxi Okwu led leadership and members of All Progressives Grand Alliance also said it received with shock the news of bomb blasts that killed many people and wounded several others in Nyanya, Abuja.

The party condemned the dastardly act and calls on Security agents to fish out the culprits and bring them to book to serve as a deterrent for those who will contemplate this cowardly act against fellow compatriots.

APGA also urged the Federal Government to sit up and take necessary actions to protect the lives and property of the citizenry in tandem with section 14(2)b of the 1999 Constitution (as amended) which states that, security and welfare of the people is the primary purpose of government. Nigerians expect dividends of democracy not carnage.