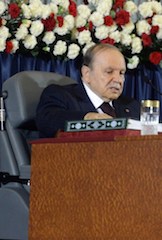 Algerian President Abdelaziz Bouteflika “flunked” a test of his oral skills at his inauguration, newspapers said Tuesday, raising doubts about the stroke victim’s ability to effectively carry out his duties.

Sitting in a wheelchair, the ailing 77-year-old Bouteflika struggled to recite the oath of office and give a speech at his televised inauguration on Monday, following his re-election for a fourth term.

“Bouteflika flunked his oral,” the leading El Watan newspaper said in an editorial.

“Handicapped by illness, he was forced to tap into his meagre resources to pass this final and challenging oral exam.”

Bouteflika, who was also in a wheelchair when he cast his ballot in the April 17 election, has hardly been seen in public since the mini-stroke that confined him to hospital in Paris for three months last year.

“Algerians who followed the tragicomic event on television saw images that gave little reassurance on the state of the health of Bouteflika, who is to preside over the country’s destiny for the next five years,” said El Watan.

The El Khabar daily put the issue on its front page, describing Bouteflika’s speech as “incomplete”.

It noted that after reciting the 94-word oath in Arabic, the president stumbled on his words during his speech, a copy of which was distributed to journalists at the ceremony, which lasted 30 minutes.

The French-language Liberte described the swearing-in ceremony as “expeditious” and said Bouteflika “only read the preamble of the confusing speech” which was 12 pages long.

“Yesterday’s performance reminded us, once again, of the stubborn issue of the president’s capacity to effectively undertake his duties,” it said.

“The regime can say everything is in order, (but) the medical debate continues with its political ramifications.”

Meanwhile, the youth protest movement Barakat (Enough) said it sent a letter to the Constitutional Council on Tuesday calling for Bouteflika to be impeached over his inability to rule.

The request was based on footage showing Bouteflika had “failed to read all his text and only one paragraph of the 29 in the speech,” Barakat’s Amina Bouraoui told AFP.

Bouteflika won 81.5 percent of votes in an election marred by low turnout and claims of fraud by his opponents, including main rival Ali Benflis, who received 12.2 percent.

One of the few remaining veterans of the war of independence against France, Bouteflika first came to power in 1999, but has been dogged by ill health and corruption scandals.

He nevertheless remains popular with many Algerians, who credit him with helping to end the devastating civil war in the 1990s.