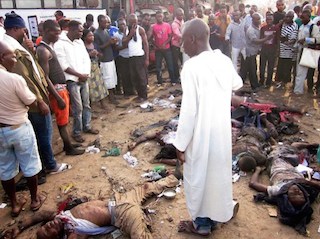 Just for Illustration: Some bomb victims

The Nigerian police said 12 persons died following an explosion that rocked Nyanya, on the outskirt of Abuja, on Thursday. The Spokesman of the police, CSP Frank Mba, told newsmen at the scene of the incident that 19 others were injured and were now receiving treatment at the various hospitals in the city.

Mba, who described the number of the casualities as “provisional” said that investigation into the explosion had already commenced.

The National Emergency Management Agency and the Nigeria Civil Defence Security Corps however confirmed that nine lives were lost while 11 persons are unconscious in the fresh bomb blasts.

In a statement they jointly signed Emmanuel Okeh, the Head of Public Relations of the NCSDC, and Manzo Ezekiel, the Press Officer of NEMA said those injured are receiving treatment in different hospitals in Abuja.

The statement reads in full: “While security agencies have cordoned off the area of an explosion this evening in Nyanya Abuja, response agencies have moved injured victims to hospitals and at least eight (9) lifeless bodies have been deposited in the mortuary while 11 unconscious victims are receiving medical attention in different hospitals in Abuja. Other injured victims too are being attended to

“The public are urged to cooperate with security agencies and avoid rushing to the scene to guard against hampering the efforts of the various agencies working together to ensure public safety.”

Eyewitnesses told NAN that the blast occurred from a Volkswagen golf car which drove from the Keffi end of the road and exploded just about 50 metres away from the scene of the April 14 blast.

Two additional security check-points have been set up between Marraba and Nyanya. Vehicles passing through the area are now being subjected to stop and search.

Meanwhile, authorities of the National Hospital have confirmed that six dead bodies, victims of the explosion, have been deposited at the hospital’s mortuary. The hospital’s spokesman, Dr Tayo Haastrup, told NAN that another nine were receiving treatment.

He said medical personnel have been mobilised to attend to the injured and many of them have been stabilised.

He, however, said the hospital was finding it difficult to cope with the number since it has still some victims of the last explosion on admission.

Haastrup said as a result two victims of the Thursday blast would be moved to Federal Staff Hospital, in Abuja.