Juve wins Serie A after Roma crash at Catania 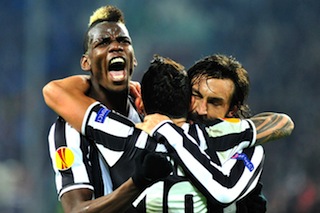 Juventus secured the 2014 Serie A title with three games to spare on Sunday after closest challengers Roma were stunned 4-1 away to relegation-haunted Catania.

It is the Turin giants’ 30th official title in Italy’s top flight and third in succession under coach Antonio Conte.

Juventus remain on course to become the first team in Serie A to finish with at least 100 points.

After hosting Atalanta on Monday, Juve travel to Roma next week and close out the season at home to Cagliari.

Juventus had congregated at a hotel in Turin on Sunday afternoon to watch Roma’s upset on television and immediately after the final whistle the celebrations began.

Juventus were stripped of two Serie A titles, which they won in 2005 and 2006, following their demotion to Serie B for their role in the Calciopoli match-fixing scandal.

Defender Leonardo Bonucci made reference when he posted a message on Twitter which read: “Champions 32.”

Roma had emerged as Juve’s only real challengers this season after setting a new Serie A record of 10 opening wins under French coach Rudi Garcia.

But despite the capital club clinging to Juve’s heels in recent weeks and Garcia remaining defiant, the Roma boss on Saturday finally conceded defeat to Juventus.

“The championship is over. Tomorrow’s (Sunday’s) result at Catania won’t change a thing, but we’ll still be going there looking to win,” said Garcia.

After a testing season trying to keep pace with the Juve juggernaut, which went on a 22-match unbeaten run following a shock 4-2 away defeat to Fiorentina in their eighth match of the season, Garcia’s words appeared to have a soporific effect.

Roma, expected to claim another 10th successive win to match their positive start to the campaign, were 2-0 down inside 34 minutes thanks to a brace from Mariano Izco and despite Francesco Totti reducing the arrears three minutes later the visitors were humiliated in a one-sided second half.

Roma, who still hold the record for the biggest winning margin in Serie A — following a 7-0 rout of Catania in November 2006 — went 3-1 down in the 55th minute when Gonzalo Bergessio pounced on the rebound from Sebastian Leto’s shot to beat Morgan De Sanctis in the Roma net.

Pablo Barrientos sealed the points and Juve’s early title celebrations when he sent an angled strike beyond the outstretched De Sanctis on 79 minutes.