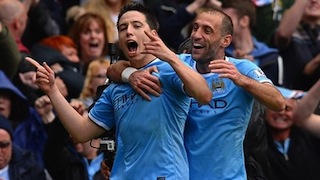 Samir Nasri and Vincent Kompany scored in each half to give City the title and make Chilean manager Manuel Pellegrini the first non-European to steer a club to the English championship.

Liverpool finished two points below City in second place after coming from behind to win 2-1 at home to Newcastle United in their final game.

Tottenham Hotspur beat Aston Villa 3-0 to pip Manchester United to the last available Europa League qualifying spot, while Norwich City’s relegation was confirmed after a 2-0 loss at home to Arsenal.