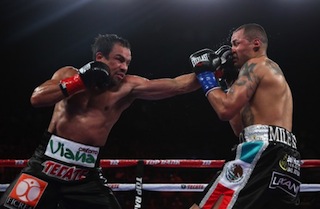 Mexican veteran Juan Manuel Marquez rallied from a ninth-round knockdown to win a unanimous decision over Mike Alvarado in a 12-round non-title welterweight fight Saturday.

The 40-year old Marquez, who scored a knockdown of his own in the eighth, has likely earned a shot at a fifth fight with Filipino superstar Manny Pacquiao with this victory.

“He was strong, fast and very worthy,” Marquez said of Alvarado. “I wanted to put on a good performance for the fans.”

Marquez dominated the early rounds but then had his hands full in the second half of the fight as the hard-punching Alvarado showed a lot of heart in coming back from being knocked down.

Marquez knocked Alvarez down late in the eighth round with a blistering right hand on the chin that was set up by a left jab. Alvarado got up just in time to hear the bell sound, ending the round.

The knockdown seemed to help wake up the 33-year-old American as he came out for the ninth with more energy and focus. With just over two minutes left in the round, he got into a wild exchange and beat Marquez to the punch with a short right that dropped the seven-time world champion to the canvas.

Alvarado also staggered Marquez twice in the fight, hurting him in the seventh with a similar short right hand then almost knocking him down again in the 11th. Marquez’s knees bent and he fell back slightly but somehow managed to stay on his feet.

In between rounds, Alvarado’s corner kept urging their fighter to “beat up this old man up.”

“It was a great fight,” said Alvarado. “He felt the power from me. It was a good experience.”

Alvarado, who fell to 34-3, took a lot of punishment in the first six rounds and fought the second half of the fight with a cut under his left eye.

Alvarado said he wishes he had been busier in the first six rounds.

“I was warming up a little too much before getting off. I needed to let my hands go,” Alvarado said.

Marquez, who has won titles in four weight classes, is expected to next fight Pacquiao in the fall which would be their fifth bout. In 2012, Marquez spectacularly knocked out the Filipino congressman in fight number four in Las Vegas.

Asked if he wants to fight “Pacman” one more time, Marquez sounded more like a promoter than a challenger.

“I don’t know at the moment, but whatever decision it will be good for me, my family, and all my Mexican fans.”

This marked the first boxing match at the refurbished Forum facility in 13 years. Marquez kept his perfect record intact at The Forum as he fought there several times as a much younger boxer.

This was the second straight defeat for former champ Alvarado who lost to Ruslan Provodnikov in his last fight.