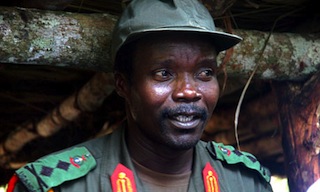 Uganda’s notorious rebel chief Joseph Kony has named his son as deputy of his Lord’s Resistance Army (LRA), a guerrila force infamous for its extreme savagery, the army said Sunday.

Salim Saleh, reported to be aged 22, is understood to have spent his entire life in the bush with his father’s force, which continues to defy international efforts to hunt them down.

“Previously the son was in charge of the group providing security to the father, but now he has an added responsibility of field command,” top Ugandan general Sam Kavuma told AFP.

Kavuma claimed it was a sign that Kony’s control of the force has been weakened, with fighters now split into several autonomous gangs.

Since the rebels were forced from Uganda, they have roamed the remote forest regions of the Central African Republic, Sudan, South Sudan and the Democratic Republic of Congo.

“The role of the son is an indication Kony has lost contact with most of his commanders, some who have been killed by our forces and others are in disarray, with the rebels becoming weaker,” Kavuma added.

However, the force has shown itself adept at avoiding capture and continues to launch attacks despite being hunted by Ugandan troops with the support of US special forces.

Kony, who launched a rebellion in Uganda over two decades ago, is wanted by the International Criminal Court along with fellow top commanders on charges of war crimes and crimes against humanity including murder, sexual slavery and using child soldiers.

“Intelligence information collated from (rebel) defectors indicate Kony’s son is the most influential person after his father,” added Kavuma, who heads the Ugandan mission searching for the rebel chief.