'My Dream Is To Put Grasscutter In Every Home' 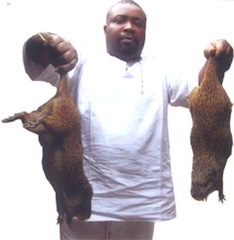 He said the production of the animal gives farmers a big chance to increase their income and offers an alternative means of livelihood to urban and rural farmers in addressing poverty.

It is for these that Onebunne launched an initiative to promote grasscutter rearing as a suitable occupation that can contribute to food security, wealth and employment creation.

According to him, grasscutter production is emerging as a productive enterprise since it is being reared in small units and is very prolific.

In term of value addition, he said grasscutter meat can be exported and used in many forms, sold in butcheries, restaurant and use to prepare different delicacies such as peper-soup, suya, smoked, dried, Spies and sausages.

The breeding families of one male and four females is sold for N45,000. The grasscutter is a member of rodent family and they are prolific breeders.

Their rate of production is faster than that of cows, goats and sheep. Grasscutter have gestation period (152 days). A breeding doe (female) can produce at least two litters yearly with an average of seven babies; that is, 14 babies per doe yearly if you manage them under good conditions.

He said a robust and thriving grasscutter meat industry would have an enormous impact on and add value to the economy.

It would not only offer up opportunities for major investors to start and grow large meat processing companies, and thereby contribute to employment creation, but it also open up avenues for the lucrative trade in smoke meat export.

What is more, the industry would transform the fortunes of many small producers and leverage assets for the poor. Others, who would benefit from the spinoff in the value chain, are the manufacturers of animal feeds, distributors, stockists, butcheries, restaurateurs etc. Besides, the consumption of grasscutter meat has many benefits; the animal has the highest protein percentage and it is one of the most nutritious meats known to man.

At present, some farmers do it to make supplementary income. He said the initial cost of setting up is small; grasscutter breed twice yearly, they have large litters and grow to a marketable size for food in short period.

However, it is a part-time job with grasscutter care and good feeding needed. Like any business, he said if one wants to make profit with grascutter one needs to assess the market.

According to him, grasscutter will continue to make money for one as long as one maintains good breeding stock.

A good doe can be bred at the age of six months and if conditions are ideal, she can breed two times a year.

Breeding does are usually kept for four years before they are slaughtered.

On the average, they can give birth to 56 young ones in four years.

The males that are not going to be used for reproduction should be fattened and kept until they weigh about 3-5kg each before they are butchered.

This takes about twelve months. Raising grasscutter has an excellent by product for garden and veggie patch. Grasscutter manure is good for the compost heap.

To establish a dynamic and viable grasscutter breeding industry, he said it is critical that a training and development program is put in place.

He and others are striving to help entrepreneurs. And over the past three years, he has received more requests from individuals, seeking to take advantage of the new business opportunity.