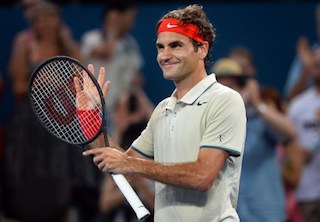 Roger Federer racked up a record-equalling 59th career win at the French Open on Sunday while Serena and Venus Williams edged closer to a third round sister showdown.

Federer kicked off his 16th consecutive Roland Garros with a 6-2, 6-4, 6-2 win over Slovakia’s Lukas Lacko, his first victory since becoming a father of twins for the second time.

The 32-year-old Swiss, who won his only Paris title in 2009, was watched by wife Mirka and older twins Myla and Charlene but not three-week old Lenny and Leo.

Federer was never troubled by Lacko, the world number 88 who has not won a claycourt match for three years.

He hit 40 winners and goes on to face either Portugal’s Gastao Elias or Diego Sebastian Schwartzman of Argentina for a place in the last 32.

“There’s always that little feeling that if you don’t feel well, if the opponent plays great, whatever happens so you could lose early. So I was happy seeing early signs out of the match that I was actually playing well and I was going to get my chances.”

Women’s top seed Serena Williams, who won the 2013 title to add to her 2002 maiden triumph in the French capital, started her 13th Roland Garros with a 6-2, 6-1 win over French wildcard Alize Lim.

Three days after the close friends were snapping ‘selfies’ of themselves at the players’ party at the Eiffel Tower, Williams fired 37 winners past Lim, the world 138, although a sloppy final game left her relying on a fifth match point to seal victory.

The win extended Williams’ record in opening rounds of the majors to 54-1 — her only blip being a first round exit to Virginie Razzano in Paris three years ago.

Williams will face either compatriot Grace Min or Spain’s Gabrine Muguruza for a place in the third round where she could then play big sister Venus.

Venus, the 29th seed and 2002 runner-up, began her campaign with a 6-4, 6-1 win against Swiss 17-year-old Belinda Bencic who was two and a half years from being born when the American made her professional debut back in 1994.

It was Williams’ second win over world number 81 Bencic, the 2013 junior champion, having defeated the teenager in Luxemburg in 2012.

“I think she has a great attitude, and it will take her a long way. Just doing everything better, serving, returning, just more experience helps a lot,” said 33-year-old Venus who is playing in her 17th French Open.

It was also a good day for other veterans on the tour.

Czech sixth seed Tomas Berdych eased past Canada’s Peter Polansky 6-3, 6-4, 6-4 on the back of 50 winners and 15 aces and next meets Kazakhstan’s Aleksandr Nedovyesov.

His reward is a second round clash with either Lukas Rosol or Jiri Vesely, both Czech Davis Cup teammates.

In the women’s event, Polish third seed Agnieszka Radwanska carved out a 6-3, 6-0 win over China’s Zhang Shuai, the world number 34.

Radwanska, sporting a vivid, floral-print dress, made heavy work of seeing off Zhang who has now lost all of her four first round matches at Roland Garros.

The first seven games all went against serve until the Pole held for 5-3. But she then swept through the final set in just 21 minutes.