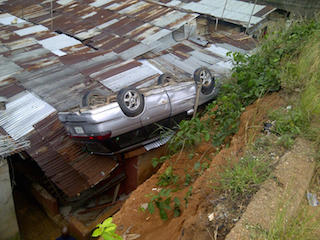 The car on rooftop

An ostensibly drunk driver careered off the Akerele Street in Oworonshoki area of Lagos, western Nigeria Sunday night and landed on the roof of two buildings located in a valley close to the road.

The accident, which happened around 8.30pm, has attracted the attention of hundreds of passers-by, résidents and Church worshippers in the built up area who throng to the place to catch a glimpse of the upturned car.

The car has the Lagos registration number LND 744 CD. The driver was not identified.

This morning, some of the residents said no vehicle had ever plunged into the valley where the zinc-roofed houses are built.

A woman who witnessed the accident when it happened said that the lone occupant of the vehicle — which landed on the roof of the two buildings– was dragged out of the car, drunk.

“He was dead drunk when some guys managed to pull him out of the car. His legs were wobbling,” she said.

Some bottles of beer that flung out of the upturned car were seen this morning on the roof of one of the houses over which it crashed.