Egyptians troop out to vote for new president 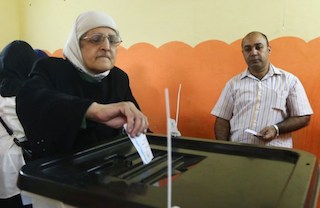 Egyptians began voting for a new president on Monday, with ex-army chief Abdel Fattah al-Sisi, who ousted the elected leader and crushed his Muslim Brotherhood movement, expected to win easily.

Sisi is expected to trounce his only rival, leftist leader Hamdeen Sabbahi, in Egypt’s second freely held presidential election, which is being held over two days.

Sisi himself arrived to cast his vote a few minutes after polling opened in the capital’s Heliopolis district amid cheers from supporters who mobbed him as he walked to the polling station.

Sisi, who quit the army in March to run for president, is riding a wave of popularity after ousting Islamist president Mohamed Morsi in July last year, and crushing his Muslim Brotherhood movement.

The election caps more than three years of political turmoil in Egypt, which has seen two presidents ousted following mass protests, thousands killed in clashes and militant attacks, and an economy left in tatters.

A police crackdown on Morsi’s supporters has killed more than 1,400 people since his ouster.

Human rights groups and secular-leaning Egyptian activists, however, say that Egypt could see worse autocracy that wat it was under the rule of Hosni Mubarak.