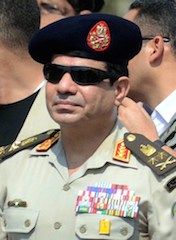 Ex-army chief Abdel Fattah al-Sisi has scored a crushing presidential election triumph and consolidated the grip of the military, 11 months after the overthrow of the only Egyptian president not drawn from its ranks.

The former general, who retired from the army to run for office, becomes Egypt’s fifth president hailing from the military, reasserting the institution’s grip on politics in the Arab world’s most populous nation.

The military has always formed the backbone of political life in Egypt and the institution has provided its leaders ever since army officers toppled the monarchy in 1952.

The only exception was Morsi, elected in 2012 a year after an uprising overthrew longtime strongman Hosni Mubarak, himself a former air force commander.

“Few would have imagined that … three years after Mubarak’s toppling, a field marshal, a new pharaoh, would be elected again with 96 percent, without even unveiling a programme and without campaigning,” said Middle East analyst Karim Bitar.

Sisi rode on a wave of support for a potential new strongman who can restore stability and revive the economy after three years of turmoil.

But his opponents say that since he ousted Morsi last July, Egypt has undergone a return to autocratic rule.

A state crackdown targeting Morsi supporters has left at least 1,400 people dead in street clashes and seen more than 15,000 others jailed.

Dozens of young activists have also been jailed for violating a law banning all but police-authorised protests.

Amid the crackdown on dissent condemned by rights groups and Western governments, the military-installed authorities had aimed for a high turnout as a sign of legitimacy.

Private and state-run media pressed Egyptians to go out and vote, and the Monday-Tuesday election was extended for a third day in a last-minute decision which sparked protests.

Sisi had called for at least 40 million of Egypt’s almost 54 million eligible voters to go to the polling stations.

But an election commission official put actual turnout at about 25 million, or 46 percent, although it could edge higher, official Al-Ahram newspaper reported on its website, down from 52 percent when Morsi was elected in 2012.

“Ultimately, we have no real way to verify (government) turnout numbers” or Sisi’s victory margin, Shadi Hamid of the Brookings Institution’s Saban Center wrote on Twitter.

He pointed to the absence of “parallel counts and not enough (international) monitors”.

Egyptian authorities are touting the election as a milestone on the road to democracy following Morsi’s ouster, but Human Rights Watch says the crackdown on opposition “stripped these elections of real meaning”.

“The intense crackdown on dissent over the last 10 months has created a repressive environment that severely undermines the fairness of the elections,” the New York-based group said Wednesday.

Morsi’s Muslim Brotherhood is hailing what they see as a successful boycott.

“The great Egyptian people have given a new slap to the military coup’s roadmap and… written the death certificate of the military coup,” said its political arm, the Freedom and Justice Party.