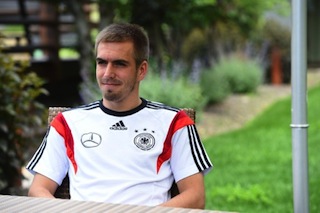 Germany’s World Cup squad jetted to Moenchengladbach for Sunday’s friendly against Cameroon without captain Philipp Lahm and goalkeeper Manuel Neuer, who flew to Munich for treatment.

Joachim Loew’s squad concluded their 10-day pre-World Cup training camp in south Tirol on Saturday and flew back to Germany, for their penultimate friendly before Brazil 2014, minus Lahm and Neuer.

The Bayern Munich stars will continue to be treated in the Bavarian capital by the German Football Association’s (DFB) medical staff in their bid to be fit for Brazil.

The pair have both laboured with injuries since the German Cup final a fortnight ago when Lahm suffered an ankle knock while Neuer damaged a shoulder.

Head coach Loew has said the there are no concerns either of them will miss the opening World Cup match against Portugal in Salvador on 16 June in Group G.

Both are expected to be involved in Germany’s final warm-up match against Armenia in Mainz next Friday before the squad flies to Brazil 24 hours later.

Lahm was seen grimacing after his participation in Friday’s session at the team’s pre-World Cup training camp in the Italian Alps was cut short.

Loew insisted it was just a precautionary measure, while Neuer trained for the second consecutive day, but was again protective of his troublesome right shoulder.

Germany’s Loew will submit his final 23-man World Cup squad on Monday and must cut three names from his preliminary group.