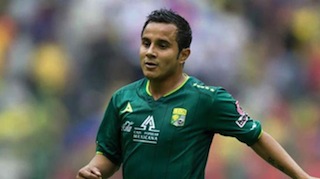 Luis Montes will not compete for Mexico at the World Cup in Brazil after suffering a serious leg fracture during a 3-1 victory over Ecuador in a friendly on Saturday.

Midfielder Montes had just scored the goal that put Mexico in front two minutes earlier when he collided with Ecuador’s Segundo Castillo during a race for a loose ball.

Montes was carted off in obvious pain on a stretcher in front of the pro-Mexican crowd of almost 85,000 at the Dallas Cowboys Stadium.

Israel Marquez, a spokesman for the Mexican Football Federation, said on his Twitter account that “it seems a fractured tibia and fibula.”

It is a big blow for Mexico who are using this and other games over the next couple of weeks as a tune up to the 2014 World Cup. Mexico’s next international friendly is Tuesday against Bosnia-Herzegovina in Chicago. They play Portugal on Friday.