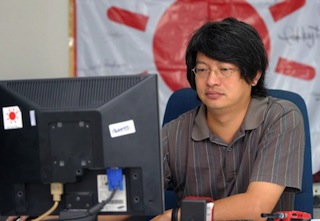 A prominent anti-coup activist in Thailand faces up to 14 years in prison if convicted of incitement, computer crimes and ignoring a summons by the junta, police said Thursday.

Sombat Boonngamanong, who led a social media campaign to stage peaceful but illegal rallies against the junta, is set to stand trial in a military court.

He has been charged with inciting unrest, violating the computer crime act and defying an order by the junta to turn himself in, according to Prasopchoke Prommul, deputy commander of the police’s crime suppression division.

“We will bring him to the military court to seek his detention,” he added.

If found guilty, Sombat faces seven years in jail for incitement, five years for spreading false information over the Internet and two years for ignoring the summons, Prasopchoke said.

Sombat was one of several hundred politicians, activists, academics and journalists called in by the junta following the May 22 coup.

Those who attended were detained in secret locations for up to a week and ordered to cease political activities.

Sombat, a prominent pro-democracy activist, refused to turn himself in, instead posting a message on Facebook saying: “Catch me if you can”.

While on the run he urged followers to stage peaceful public demonstrations, flashing the three-finger salute from “The Hunger Games” films that has become a symbol of defiance against the junta.

He was tracked down and arrested a week ago in Chonburi, southeast of Bangkok.

Sombat is the leader of a faction of the “Red Shirts” movement, which broadly supports fugitive former premier Thaksin Shinawatra and his sister Yingluck, who was deposed as prime minister last month.

Former education minister Chaturon Chaisang, who also refused to answer the summons, was detained by soldiers in a dramatic raid on a news conference last month, and faces trial in a military court.

The ruling generals last month imposed martial law, media censorship and a night-time curfew as part of what they described as an attempt to end years of political turmoil.

Critics see the coup as a pretext for a purge of politicians and officials loyal to Thaksin, who was himself ousted by the army in 2006 and lives in Dubai to avoid prison for a corruption conviction.

The junta has said elections are not expected to be held for at least a year to allow political “reforms”, including the drafting of a new constitution.