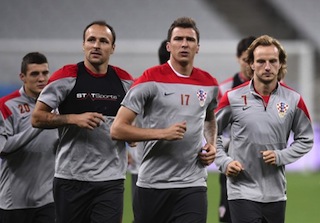 Croatia have declared that  Brazil should forget winning the opening match of the 20th FIFA World tonight and they vowed  to try to create a “miracle” when they take on mighty hosts.

Captain Darijo Srna, speaking ahead of the clash in Sao Paulo, said he could not make promises about how the team would perform in the tournament but pledged they would give 100 per cent.

The side, ranked 18th in the world, are led by experienced stars such as Real Madrid midfield star Luka Modric and Bayern Munich striker Mario Mandzukic, who misses the opening match through suspension.

Srna said the prospect of coming up against the favourites and their talisman Neymar at the Corinthians Arena was causing him some concern.

“I’m not sleeping that well. We are playing the best footballers on the planet,” he said.

But he added: “We, little Croatia, will try to create a miracle.”

Coach Niko Kovac said he was not losing sleep about the prospect of Neymar wreaking havoc for the five-times world champions, insisting he had had months to prepare for the task.

“Brazil is not just Neymar. There are many other good players in the Brazil side,” he said.

“We will try everything to surprise them, to create an upset, to create a positive result,” added the coach, who said his side, who like to play possession football, were capable of a “historic result”.

“We are not going to park the bus tomorrow,” he said. “We are going to attack. We are going to seek our chances because Brazil are so strong that if you want success against them you have to score.”

Meanwhile, Coach Luiz Felipe Scolari has the luxury of being able to field the same team that destroyed world champions Spain 3-0 in the final of last year’s Confederations Cup, with Barcelona star Neymar the focal point of a powerful and settled line-up.

The five-time champions are expected to qualify from their group without too much trouble but Barcelona defender Dani Alves admitted there was anxiety ahead of the Sao Paulo opener, as they seek to ease the jitters.

“I have always said that if you don’t feel anxiety it is not worth being a professional athlete. The opening game is difficult, important,” said Alves.

“The three points count but so does the idea of sending out a message to our rivals. The most important game at the World Cup, for everyone, is the opening game.”

He added: “We will only know on Thursday if everything is OK. We are very confident and we want this moment to come. We want to enjoy the World Cup. We are going to try to give a good image.”