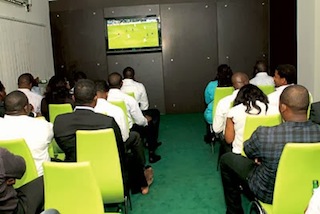 A cross section of football fans in Lagos, Nigeria have continued to slam the centre referee, Yuichi Nishimura of Japan, who awarded a controversial penalty to Brazil in Thursday’s night World Cup opening match against Croatia decided at the Arena Corinthians, Sao Paulo, Brazil.

Brazil fell behind after an own-goal from Marcelo in the 11th minute before two goals from Neymar, the second a hotly debated penalty and a late Oscar’s strike gave the hosts all three points in a 3-1 win.

The award of the penalty to Fred for falling under the slightest of contact from Croatia’s Dejan Lovren was the decision which drew the greatest ire from football fans in Lagos who expressed their displeasure to P.M.NEWS Sports.

Referee Nishimura came under serious criticism after this action and even Croatia coach, Niko Kovac, described the referee as being partial.

One of the respondents, who identified himself as Benjamin Nwokolo said Nishimura was wrong in awarding Brazil the controversial penalty, stressing that Fred, should have been cautioned.

Another respondent, Gbolahan Ogunleye, questioned the rationale behind awarding the penalty. He called on FIFA to sanction Nishimura accordingly.

In the words of Ogunleye, who is a die-hard Arsenal fan in Lagos: “It was a big blunder for FIFA to have given a match of such magnitude to that referee because some of his calls were questionable, even that penalty he awarded Brazil calls for serious scrutiny and he should be sanctioned if found wanting.”

On his part Coach Joshua Ngozi, who tinkers a grassroots football team known as Giant Killers based in FESTAC Town, argued that if the referee was in the right position he wouldn’t had awarded the controversial penalty.

“The referee handled the match professionally in issuing cards to players for some offences, but what baffled me most was the penalty, I strongly belief that Fred should get a yellow card for simulation.”

FIFA licenced football agent based in Lagos State, Princely Nwafor said the referee was wrong to award the controversial penalty, but called for caution in castigating the referee.

“Mind you the referee had few seconds to take a decision. I think after he might have watched the video of the match, he would agree that he made a mistake. As a matter of fact, he is a human being and he is not above mistakes,” Nwafor said.