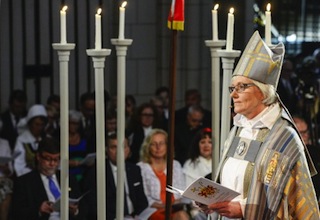 New archbishop of the Church of Sweden Antje Jackelen attends her installation mass at the Uppsala Cathedral, on June 15, 2014.

German-born Antje Jackelén, was on Sunday ordained as the first woman to head the Swedish Lutheran Church, and received the archbishop’s insignia: the cross, crosier and mitre.

The 59-year old Jackelén, mother of two daughters, ordained at the Uppsala Cathedral, Stockholm, was the Sweden’s first female archbishop in 850 years.

Jackelen’s whose husband Heinz was a retired minister, was in October elected with 56 per cent of votes, and succeeds Anders Wejryd, who retired as head of the Church of Sweden.

Jackelén was born in Herdecke, Germany, studied theology at Tuebingen University in Germany and Uppsala University in Sweden, and in 1980 was ordained in Stockholm.

She defended her thesis at the University of Lund in 1999, and has also been professor at the Lutheran School of Theology in Chicago.

Jackelén said she wanted the church to promote dialogue with other Christian churches and other religions, as well as with the worlds of politics and science.

Another area where she believed the church could play a role was climate change, “possibly the greatest challenge mankind has ever faced.”

As archbishop her challenges include tackling the plight of members. About 67 per cent of Sweden’s 9.5 million people are members of the Church of Sweden.

In 2000, the state and church separated.

The Church of Sweden then became a “faith-community,” along with other religious groupings such as the Pentecostals, Baptists, Roman Catholics, Jews and Muslims.

Present at the ordination were King Carl Gustaf, Queen Silvia and Crown Princess Victoria, the 13 bishops in the Church of Sweden.