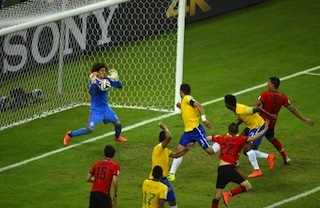 Mexico goalkeeper Guillermo Ochoa sensationally kept Brazil at bay to earn Mexico a 0-0 in World Cup Group A in Fortaleza on Tuesday.

Brazil and Barcelona star Neymar twice came closest to breaking the deadlock in each half but both times was thwarted by point blank saves by man-of-the-match Ochoa.

The result pushed both sides a point closer to the last 16 as they now have a four-point lead over fellow Group A rivals Cameroon and Croatia, who meet in Manuas on Wednesday.

Mexico largely matched Brazil throughout a pulsating match, although the hosts created the more clear-cut openings.

Neymar had the first clear sight of goal on 26 minutes with a header from Dani Alves’s pinpoint cross but Ochoa plunged to his right to save one-handed.

A minute from the break a clever chest control by centre-back Thiago Silva teed up Paulinho, but Ochoa rushed out to block his close range effort.

Ochoa was the hero again on 69 minutes after Neymar controlled a pass from Bernard on his chest and lashed in a near post shot that the goalkeeper scrambled behind.

But their closest effort came from Raul Jimenez in the last minute as Brazil goalkeeper Julio Cesar just pushed his goalbound shot to safety.