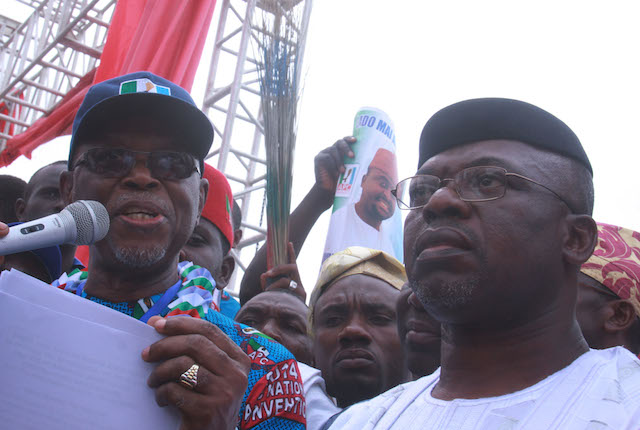 Chief Bisi Akande formally ends his duty as interim chairman of Nigeria’s largest opposition party, the All Progressives Congress (APC), at the inauguration of the new John Odigie-Oyegun led executive in Abuja on Wednesday, June 18th 2014.

Here is the full text of Chief Akande’s speech, in which he urges the new EXCO to carry on the work of building the party

Today is a historic day in the life of our party, the All Progressives Congress (APC).

The party that emerged like a Phoenix from the ashes of Action Congress of Nigeria (ACN), All Nigeria Peoples Party (ANPP) and the Congress for Progressive Change (CPC), which willingly gave up their identities in order to create a credible, alternative political platform for Nigerians, is inaugurating its first set of elected national executive today.
That this day has come at all is a major achievement, because anti-democratic forces, who will rather turn our country into a one-party state, did not give our party a chance to survive. In fact, they did not believe that the new child called the All Progressives Congress (APC) will be born at all.

When the leaders of the various parties I mentioned above came together, out of sheer patriotic fervour, to consummate the first successful merger in the history of our dear nation, the enemies of progress jeered at us, deriding us as strange bedfellows who cannot work together.

They vowed that our merger project would flounder on the altar of irreconcilable individual ambitions, and one overly-excited fellow even threatened to change his name if the merger succeeds and the party is indeed registered.

Then, on July 31st 2013, our party was born when the Independent National Electoral Commission (INEC) announced the registration of the APC.

I must say that while our party was born solid and strong, the process leading to the birth was not altogether smooth, as all sorts of obstacles were strewn on our path. Remember that two phantom APCs – the African Peoples Congress and the All Patriotic Citizens – were also quickly scrambled by the anti-democratic forces who were bent on frustrating the real APC.

But it is to the credit of our leadership, our members and indeed all Nigerians who yearn for a truly democratic nation that we surmounted all the odds and then turned our diversity into a great advantage.

Today, we have a truly Pan-Nigerian political party that has now given our long-suffering people hope. Hope that this democracy will indeed survive. Hope that the dividends of democracy will not continue to elude the people. Hope that Nigeria will not become a one-party state. And the hope that our country will soon join the comity of developed and truly democratic nations.

I believe that our country, Nigeria, has a lot to learn from the story of our party. Our country’s diversity, which many unpatriotic politicians have tried to exploit for personal political gains, is a huge advantage that, when properly harnessed, can actually propel our country to greater heights

I want to use this occasion to congratulate our leaders, most of whom are seated here today, for making this day possible. Their sacrifice, their perseverance, their patriotism and their love of country all worked together to bring us this far. And having come this far, who says we can go no further?

The same spirit of sacrifice and patriotic fervour were on display on Friday here in Abuja, when we successfully held our inaugural convention against all odds.

Thousands of our members defied the vagaries of the weather to cast their votes and elect those who will guide our party on the next leg of its epic journey. They defied threats. They defied hunger and fatigue as they waited patiently all day and all night to vote. Instead of shielding themselves from the rain, they moved to protect the ballot boxes. When the public address system succumbed to the rain, they mobilized and moved from one delegation to another to tell them it is their turn to vote. They showed that politics does not necessarily have to be a war!

And when it was all over, there was not a single report of violence or theft. APC has successfully held its first-ever national convention. Nigerians are the best for it. Our detractors have been shamed!

Today, we are here to inaugurate the products of that transparent, credible and rancour-free process. – a new, elected National Executive Committee.

I congratulate you on your elections, and I am sure you will carry on with the same spirit of sacrifice, determination and patriotism that will lead our party to Aso Rock, which is our ultimate destination, next year.

Let me say here that we do not seek power for the sake of power, but for the sake of our people, who are undoubtedly worse off today than they were in 1999, the advent of the Fourth Republic, no thanks to the globally-acknowledged misrule, cluelessness and incompetence of the PDP-led federal government.

In all your actions and decisions, I urge you to carry along all members of our party, because we are one big, happy and united family.

May I also use this opportunity to thank and congratulate all members of the Interim Exco, for nurturing our party to this level. Life is like a relay race. We have done our bit. It is now your turn. Rest assured, however, that we will continue to play our part, albeit from behind, in strengthening our party

And to all our 20 million plus members and teeming supporters across Nigeria, I say thank you for the support and the confidence you reposed in our party. I hope you will continue to support us in the days and months ahead, as we put our shoulder to the plough to build a great, virile, respectable and productive nation that all Nigerians can be proud of