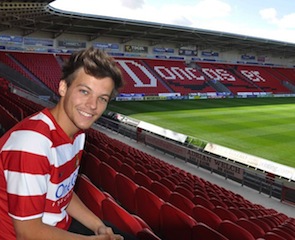 One Direction star Louis Tomlinson has completed a takeover of English football club Doncaster Rovers, a spokesman for his co-owner said Thursday.

Tomlinson, 22, is a lifelong fan of his hometown club, which plays in England’s third flight, and turned out for their reserves in February, which he described as a “childhood dream.”

Now the boyband sensation has gone a step further by taking control of the northern English team alongside businessman John Ryan.

“It’s done, the takeover is complete,” Ryan’s spokesman said, adding that more details would be revealed at a press conference later Thursday.

One Direction became global superstars after competing in television talent show “The X-Factor” in 2010.

They have sold 35 million records worldwide, with hit singles including “Best Song Ever” and “What Makes You Beautiful”.