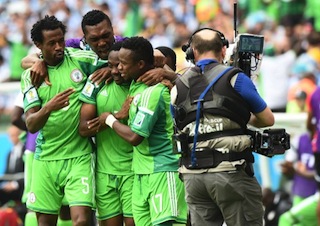 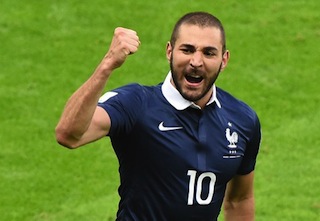 France will play Nigeria in the second round of the ongoing World Cup in Brazil after they played 0-0 against Ecuador to secure top place in Group E.

Nigeria had earlier lost 2-3 to Argentina but still qualified behind their South American foes.

France, who had scored eight goals in their two previous games, powered forward from the start.

But through luck, determination, bad finishing and brilliant goalkeeping by Alexander Dominguez, Ecuador resisted even after captain and Manchester United winger Antonio Valencia was ordered off early in the second half for a studs up challenge on Lucas Digne.

The South Americans had chances to steal the game from the French, but bowed out of the World Cup as Switzerland beat Honduras 3-0 to grab second place in Group E.

Dominguez was constantly in the thick of the action

He parried away one cross that just kept the ball away from Karim Benzema who was stood before an open goal. Dominguez also made a desperate stretch to keep out a Paul Pogba header.

Ecuador midfielder Christian Noboa was less lucky when he suffered a head wounded in an aerial skirmish. Blood seeped through the bandage he wore through the game.

Almost straight from the restart, Bakary Sagna fired the ball into the penalty area and Antoine Griezmann deftly directed it towards the goal. Dominguez’s reflex save pushed the ball onto the post and away to safety.

Valencia then lunged in clumsily on Paris St Germain defender Digne and scraped his studs up and down the Frenchman’s leg.