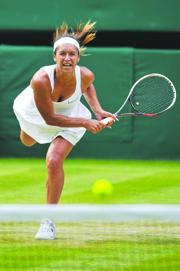 •WHOPS... Britain's Heather Watson serves against Germany's Angelique Kerber during their women's singles second round match on Day Four of the 2014 Wimbledon Championships at The All England Tennis Club in Wimbledon, southwest London, on 26 June, 2014. AFP PHOTO.

Pat Cash, the former Wimbledon champion, has claimed that women players at this year’s tournament have been forced to play bra-less following a clamp down on the all-white rule.

It comes after some players, including Serena Williams, tried to introduce colour into their SW19 outfits by wearing bright underwear in previous years.

But under new guidelines issued this year, players may only break up their all-white outfits with a coloured trim of 1cm width.

In a letter sent to players, tournament referee Andrew Jarrett, also said: “Undergarments that either are or can be visible during play (including due to perspiration) must also be completely white and contain no more than 1cm of coloured trim.”

Players are said to have reacted angrily to the new rules and in an interview with BBC Radio 5 Live, Pat Cash said: “Some of the girls have been told to go back and change their bras and tops because they had slight colour on them.

“I believe some of the girls didn’t have suitable sports bras and had to go without them. It has absolutely gone ridiculous.”

He later pulled out of the tournament – where he was due to play in the master’s competition – in protest at the new rules after his own training shoes fell foul of the new regulations. He said that last time he played without the specially adapted shoes, he suffered an injury.

Cash added: “One of the players was called into the referees’ office because he had blue underwear that showed through when he got sweaty so he was told not to wear dark underwear.”

Although some players have reacted angrily, Venus Williams said she approved of the new rule. In an interview after her win on Wednesday, the usually flamboyant player said: ” I think it’s a nice change. I think everyone just kind of glows in white. Obviously not all year, because anything every day is boring. But during these two weeks, it’s nice.”

Naomi Broady, the British tennis player who lost in the second round on Wednesday, has not worn a bra this week. It is not known why not.

A spokesman for the All England Lawn Tennis Club said it would not comment on the bra issue.