Serena beaten by Cornet at Wimbledon 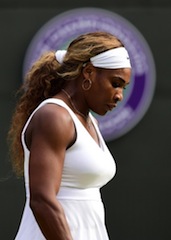 US player Serena Williams reacts after losing to Alize Cornet

Serena Williams crashed to her earliest exit at Wimbledon for nine years as the world number one suffered a shock 1-6, 6-3, 6-4 loss against French 24th seed Alize Cornet in the third round on Saturday.

Top seed Williams, a five-time Wimbledon champion, had reached at least the last 16 in each of her previous seven visits to the All England Club, but Cornet fought back from a set down to end that sequence in two hours and four minutes of gripping drama on Court One.

It was the shell-shocked 32-year-old’s earliest Wimbledon exit since her loss to Jill Craybas at the same stage in 2005.

Elsewhere, Roger Federer was barely troubled as he cruised into the last 16 at Wimbledon on Saturday with a straight sets win over Santiago Giraldo under the Centre Court roof.

The seven-time champion triumphed 6-3, 6-1, 6-3 over the Colombian world number 35 in an hour and 21 minutes and rarely looked troubled.

In the fourth round, Federer faces either the big-serving Polish 15th seed Jerzy Janowicz, a semi-finalist last year, or Tommy Robredo of Spain, seeded 23rd, for a place in the quarter-finals.

It’s really about maintaining a good level of play,” said Federer, who is yet to lose a set in the tournament and has only dropped 23 games in three matches.

“I’m physically in pretty good shape right now, a few niggling things always going on right now but nothing really that worries me at this point.

“I’ve just got to keep playing aggressive and serving well. I think that’s what you’ve got to do on this service. If I can keep the points short, great, otherwise, battle it out from the baseline.

“It’s been an easy-going sort of last couple of weeks here at Wimbledon. We’ve really enjoyed it as a family and clearly I’m kept busy on that front. I hope it’s going to be nice weather on Sunday so we can go outdoors a bit.”

Giraldo, 26, is in the form of his life, having hit a career-high ranking of 34 in May and it would have taken the biggest win of his career to become the first Colombian to reach the last 16 at Wimbledon.

But it was only at 3-3 in the third set when he fashioned two break points, and Federer pulled off some smart serves to win the game and did not look back.

“I stayed in control right until mid-way through the third,” the 32-year-old said.

“It was important to serve big then and get out of that game and then the next thing you know I got break points of my own.

“I was very happy, it was a really good match. I’m very pleased, it’s always good to keep on moving on. Last year I lost in the second round so I’m aware of the tough draws you get, or the danger of certain players on this surface and I’ve been able to get it done many time — but not always, clearly.”

“I’m worried about the first week, getting to the second one, then the grass plays quite differently, actually, the second week so you can do a few different things depending on the weather,” Federer said.

“Don’t even know who my next round opponent is. I’m just happy I made it to the second week.”