Will this man lead the world to Nigeria's kidnapped schoolgirls? 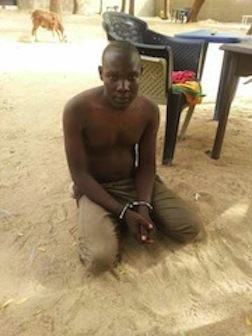 Babuji Ya'ari: does he know where our girls are?

Businessman, Babuji Ya’ari shot into international centre-stage last night as the man who holds the key as to the whereabouts of the kidnapped 219 schoolgirls on 14 April by Boko Haram.

Nigeria military authorities said they had arrested the man and are accusing him of being at the head of a terrorists’ intelligence cell connected with the abduction of School Girls in Chibok, Borno State. Arrested with him are some women, also said to belong to the terrorist network.

In a statement signed by Major General Chris Olukolade, Defence spokesperson, the military said the businessman is a member of the Youth Vigilante Group popularly known as Civilian JTF which he uses as cover while remaining an active terrorist.

Ya’ari, according to the Defence spokesperson also spearheaded the murder of the Emir of Gwoza.

Olukolade said Ya’ari’s main role in the group is to spy and gather information for the terrorists group.

He has also been coordinating several deadly attacks in Maiduguri since 2011, including the daring attacks on Customs and military locations as well as the planting of IEDs in several locations in the town.

The military said the arrest of the businessman who is known to deal in tricycles has also yielded some vital information and facilitated the arrest of other members of the terrorists’ intelligence cell who are women.

One of them, Hafsat Bako had earlier escaped to Gombe State to avoid suspicion but was tracked and arrested.

Prior to her arrest, Hafsat coordinated the payment of other operatives on the payroll of the group.

In her confession, she disclosed that a minimum of N10,000 is paid to each operative depending on the enormity of his task.

Another female suspect named Haj Kaka who doubles as an armourer and a spy for the terrorists group has also been arrested.

Until their arrest, all the suspects actively operated a terrorists’ intelligence cell in collaboration with others still at large.

In another development, Olukolade said troops deployed in Goniri, Yobe State, over the weekend, had an encounter with terrorists, resulting in casualties on both sides after the attack was successfully repelled.