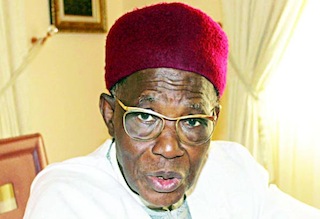 A renowned northern politician and former Minister of Transportation during the Second Republic, Umaru Dikko, is dead, his son, Bello Dikko, has said.

A family member said he suffered three strokes in a row and had been sick for quite some time.

Dikko was a trusted adviser to President Shehu Shagari. He was also the Nigerian minister for Transportation from 1979-1983.

He started playing a role in the nation’s governance in 1967, when he was appointed as a commissioner in the then North Central State of Nigeria (now Kaduna State).

He was also secretary of a committee set up by General Hassan Katsina to unite the Northerners after a coup in 1966. In 1979, he was made Shagari’s campaign manager for the successful presidential campaign of the National Party of Nigeria.

During the nation’s Second Republic, he played prominent roles as transport minister and head of the presidential task force on rice.

A military coup on December 31, 1983 overthrew the government of Shagari. Dikko fled into exile in London as well as a few other ministers and party officials of the National Party of Nigeria.

The new military regime accused him of large-scale corruption while in office, in particular of embezzling millions of dollars from the nation’s oil revenues.

On 5 July 1984, he played the central role in the Dikko Affair; he was found drugged in a crate at Stansted Airport that was being claimed as Diplomatic Baggage, an apparent victim of a government sanctioned kidnapping. The crate’s destination was Lagos.